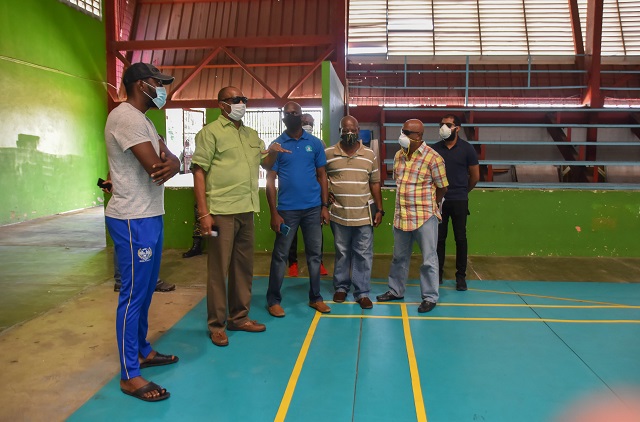 Chief Executive Officer of the National COVID-19 Task Force (second from left) and other officials at the Gymnasium, Mandela Avenue, Georgetown.

Director General, Ministry of the Presidency and Chief Executive Officer (CEO) of the National COVID-19 Task Force (NCTF) Permanent Secretariat, Mr. Joseph Harmon on Saturday said the Government is focused on implementing a multi-faceted approach to bring relief to citizens in the wake of emergency measures put in place to mitigate the COVID-19 pandemic.

In an invited comment during a tour of the National Gymnasium, which will now serve as a storage facility for the stockpiling of materials for the Civil Defence Commission (CDC), Mr. Harmon said the Government is looking to implement several measures, which will target the vulnerable sections of society, farmers, business owners and students.

Vulnerable people
Harmon said the Government had classified the measures into short term and long-term actions. In the short term, he noted that those persons who are affected and deemed vulnerable will be looked after while in the medium term, the Government is looking to reboot some small businesses so that they can continue their production and manufacturing activities.

“So, the efforts in the first phase will be to deal with those immediate issues. We have worked over the last week in trying to determine that category of vulnerable persons. We have gotten to the point now where we are fairly comfortable with that and it is not the traditional areas of vulnerabilities. There are persons who might not have been vulnerable before COVID but because of the measures that we have introduced, it has caused them to be at home; they cannot work or feed their families so we have to consider that as a vulnerability. We are doing several things at the same time. We are looking at the traditional vulnerabilities, age, disability, et cetera, but then we are looking at persons who have been affected in terms of their businesses,” he was quoted as saying in a Ministry of the Presidency.

Business reboot
In the first instance, the Director General said that the Ministry of Business will shortly commence the coordination of small businesses to determine how best the Government can lend assistance to ensure they thrive and recover during and after this period. 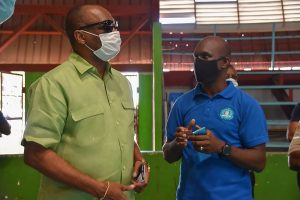 “That is the coordination of a small business plan. We are also looking at a plan from the Ministry of Agriculture, which is called REAP [Regional Emergency Agricultural Project]. That has to do with re-energising small-scale agriculture and bringing people back to basics so they understand that after COVID, there is going to be a food crisis and we have to prepare our people from now. So, during this phase, we will be looking at how best we can help small farmers in so far as giving them seeds, equipment and agricultural extension services so that they can go back to the land. While we are assisting with hampers, we want to wean people off of that,” he said.

Education
Thirdly, Harmon noted that the Ministry of Education in collaboration with the Ministry of Public Telecommunications and other agencies, is working to ensure that public schools’ students can continue their education while the schools remain closed. He noted that the Government is cognisant of the fact that not every student has access to internet and is therefore working on practicable solutions.

“Then, as you know, some people are working from home and they are still being paid so the Ministry of Public Service is looking to see how best we can optimise that to ensure the Government is still efficiently managed,” he added.

The Director General also made it clear that contrary to some reports, Prime Minister Moses Nagamootoo remains the Chairman of the NCTF and the Secretariat must report to him.

“All we are doing in this Secretariat is being done under the general and specific guidance of the Prime Minister who is the Chairman of the Task Force. We report to him and then he reports to the Council of Ministers. We are going to do whatever is in the best interest of the people of Guyana to make sure they are safe and prepared for during this virus and after. This is about strengthening and operationalising the Task Force,” he said.

2020-04-25
Denis Chabrol
Previous: OPINION: A coalescing of foreign positions, with Americans in front
Next: Harmon no longer Director-General of the Ministry of the Presidency