Ex-wife of PPP co-founder found dead in her home 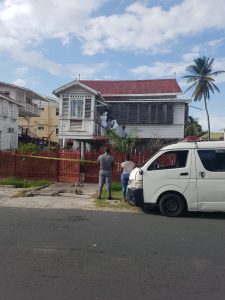 The residence of Audrey Salmalay on 109 Barrack Street, Kingston, Georgetown.

The ex-wife of People’s Progressive Party co-founder, Senior Counsel, Ashton Chase died almost one week ago at her residence in Kingston, Georgetown.

Audrey Salmalay was said to be in her 90s.

Police were Friday afternoon summoned to her residence at Barrack Street, Kingston, Georgetown.

After neighbours did not see her lights turned on and at least one window opened, they became suspicious and summoned people at a prominent law firm who were close to her, according to well-placed sources.

Police were accompanied to the house at 109 Barrack Street, Kingston, Georgetown.

They broke the door and entered the building where her decomposing body was found in her bedroom.

Her daughter, Serita Chase, who lives in Canada, was informed.

Senior Counsel, Ashton Chase’s daughter, Attorney-at-Law, Pauline Chase was informed and she arrived at the scene.

Previous: Granger denies he or gov’t hired US lobbying firm, despite official documents
Next: No curfew extension for GECOM’s national recount; foreign scrutineers, observers must be quarantined for 14 days