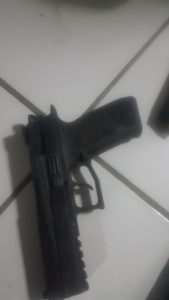 The handgun allegedly found on the premises of two brothers

Two brothers are among four men arrested within the last 24 hours in connection with alleged possession of two guns and ammunition.

The arrests were made at GuyHoc Park, Georgetown, and Number 72 Village, Corentyne, Berbice.

The two brothers were arrested after police alleged that an unlicensed pistol and a motorcycle suspected to have been stolen or unlawfully obtained were found on their premises.

Police say one of the suspects who attempted to escape, received minor injuries during the process of being subdued.

And at Number 72 Village, Corentyne, two men on a motorcycle attempted to flee when police approached them.

During their escape bid, they collided with another motorcycle, bearing licence number, CJ 8979, driven by Nicholas Boyce and pillion rider Rockford Hinds.

Police searched a haversack that was in possession of the unnamed driver and pillion rider and found an unlicensed single barrel shotgun and fifteen live cartridges.

The pillion rider was promptly arrested while the driver managed to escape the lawmen. He hours later turned himself in at Springlands Police Station.

Hinds was treated for injuries and sent away and Boyce was transferred to the New Amsterdam Public Hospital and admitted but later discharged.