One dead, one injured after car slams into cow 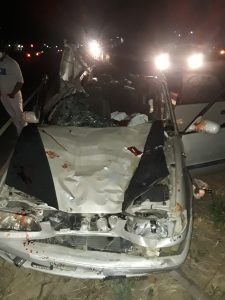 An occupant died and the driver was severely injured Tuesday night when the car they were travelling in slammed into a cow.

The accident occurred at about 9pm on the Good Hope Public Road, East Coast Demerara.

The dead man has been identified as 32-year-old Rakesh Singh of Lot 46 Village, Corentyne, Berbice.

Police were told that the car was speeding west along the Good Hope Public Road when the front of the vehicle hit a brown cow that was standing on the carriageway.

Singh and Benjamin were picked up in an unconscious condition and rushed to the Georgetown Public Hospital.

Singh was pronounced dead on arrival while the driver was admitted as a patient suffering from head injuries.

United States travel advisories have in the past cautioned Americans about animals on Guyana’s roadways.