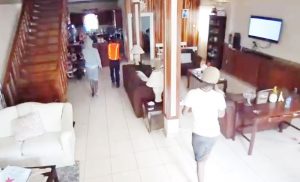 The offences were committed on Ryan Rajmangan and Nicholas Prince at Lot 335 Republic Gardens on April 9, 2019.

They appeared at the Diamond/Grove Magistrate’s Court before Magistrate Sunil Scarce, pleaded not guilty and were remanded until May 15, 2020.

Additionally, police said Gregory Boyce, 35, of Lot 86 D’urban and Smyth streets, Werk-en-Rust, who is Lynch’s brother, was charged with receiving one gold chain, the property of Jewell Rajmangal, the wife of Ryan Rajmangal.

Previous: One dead, one injured after car slams into cow
Next: OAS elections observer mission calls for removal of biased persons from national vote recount