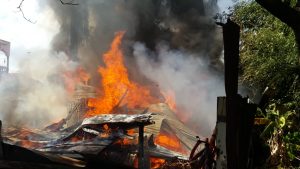 The cause of the fire was not immediately known, but one of the occupants said the fire started in an adjacent bedroom.

The occupants included 11 children and four adults who all lived in the decades-old wooden house that fell several years ago.

Security guard, Annette Heywood, 38, said she was asleep when she heard someone raising a fire alarm and opened her eyes to the blaze. “I don’t know what happen. I came home from work and I was sleeping. But all I hear they holler for fire and by the time I open my eyes, indeed I see fire and I run out,” she told News-Talk Radio Guyana 103.1 FM/Demerara Waves Online News. 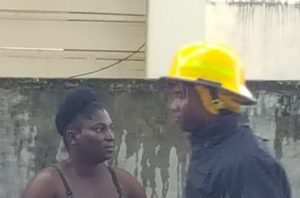 Annette Haywood and a firefighter at the scene of the blaze that destroyed her house.

Heywood, who was clad in a brassiere and short pants, said “I couldn’t save nothing, nothing because the fire was already blazing.”

Joshua McAndrew said while he and Heywood were resting, he smelled smoke and he saw the “fire running” from the left bedroom. He said all of the occupants evacuated the building and they saw the fire blazing.

None of the nearby houses was affected by the fire.