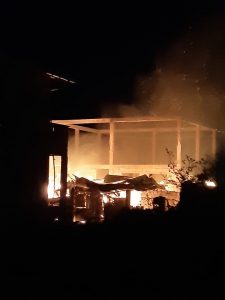 Ten persons are now homeless as a result of two fires.

Fire Chief, Marlon Gentle says at about 3am on Saturday, firefighters responded to a call at Bent Street, Wortmanville, where a two-storey wooden house was ablaze.

No one was injured, but eight persons were left homeless.

Mr Gentle says investigators believe the fire was deliberately set by an occupant during a disagreement.

In the second fire at Haslington Village, East Coast Demerara, a house was destroyed, leaving two persons homeless. There were no injuries.

Firefighters were told that one of the occupants left a kerosene stove alight and went to bed.