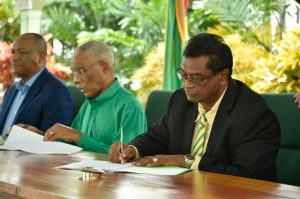 A Partnership for National Unity+Alliance For Change (APNU+AFC) has labelled the Private Sector Commission (PSC) a “stooge” of the People’s Progressive Party (PPP) for insisting that a national recount would be a waste of time.

This simplistic posture of the PSC, not only abrogates the transparency they claim to seek, but has removed the veil of neutrality in which it ought to be cloaked and incontrovertibly identifies that entity as a mere stooge of the Opposition PPP/C,” the coalition said in a statement issued Tuesday night.

The coalition said the PSC’s “obvious” political bias does not allow that business organisation to knowledge that there were discrepancies in other Districts, which led to the APNU+AFC asking for a recount in Districts 3 and 6, both PPP/C strongholds, amongst others which was refused by Returning Officers.

The incumbent coalition also called for an “audit” instead of merely a recount of the ballots cast at the March 2, 2020 general elections. “The Coalition awaits GECOM’s direction on the conduct of the recount which we hope will include an audit of the contents of each ballot box,” the coalition said. The last time an election audit was conducted was in 1998 by Trinidadian jurist and diplomat, Ulric Cross, under the auspices of the Caribbean Community (CARICOM).

APNU+AFC hoped the audit would consider the current prevailing circumstances in which the country is engulfed, including the COVID-19 pandemic. There has been no declared winner more than one month after the March 2 polls and already five persons have died from the coronavirus.

Pro-coalition Elections Commissioner, Vincent Alexander has already floated the idea of whether the recount should merely be a counting of ballots or an audit. The seven-member commission is Wednesday expected to receive a recount plan from the Chief Elections Officer, Keith Lowenfield.

The Commission hopes that CARICOM will dispatch a team of scrutineers to validate the count.

Guyanese-American businessman, Wesley Kirton, has since questioned PSC Chairman, Gerry Gouveia to justify his opposition to a recount. “To dismiss a national recount as merely a waste of time is reckless. As much as I request an explanation, I firmly believe that there can be justifiable reason not to have a national recount,” said Kirton. But Gouveia suggested that he agreed that a national recount is required and the PSC’s position is “not a one-man show” and reflects the organisation’s position.

Expressing “great consternation” at the PSC’s utterances about the planned national recount, APNU+AFC cited the business organisation for “absolute hypocrisy” in not backing a recount to the benefit of all Guyanese. “The PSC has demonstrated in no small measure, their contempt for and underestimation of the intelligence of the Guyanese people, who understand that a total recount is the only true measure of complete transparency,” the coalition said.

The coalition reiterated that it was confident of victory. The PPPC, backed by a release of its Statements of Poll, has also claimed it won.

President David Granger, and PPP General Secretary and Opposition Leader Bharrat Jagdeo last month agreed to a national recount, but that plan was scuttled by legal action which eventually saw the Guyana Court of Appeal ruling on Sunday that GECOM could not cede responsibility for the conduct, management and supervision of elections to anyone else.