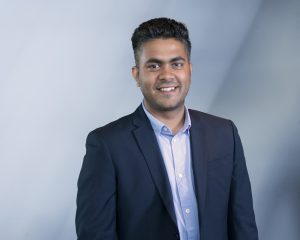 Aditya is a Senior Analyst on the Global E&P team at Rystad Energy responsible for Latin America E&P operations coverage and the analysis of global oil and gas fiscal regimes. He holds a Bachelors in Petroleum Engineering from the University of Pune in Maharashtra, India. (Rystad Energy picture)

Plummeting demand for oil as a result of the Coronavirus (COVID-19) pandemic and an oil price war are expected to see Guyana earning less than the US$300 million it had expected to rake in annually from the Liza Phase 1 project and force ExxonMobil to push back developing other oil reservoirs, an analyst said.

ExxonMobil spokeswoman in Guyana, Janelle Persaud said Thursday that “we have no new updates at this time.”

Senior Analyst at the Norway-headquartered Rystad Energy, Aditya Ravi told Demerara Waves Online News/News-Talk Radio Guyana 103.1 FM that Guyana was now expected to earn US$160 million to US$190 million annually from Liza 1. “That will take a hit in the current price environment,” he said.

He added that Guyana was expected to earn less from oil during 2021 and 2022 before prices recover in 2023. “By the time, they are back in 2023 we do not see any sort of significant change in what Guyana makes from the Stabroek Block,” he said.

He said that although ExxonMobil’s breakeven price is US$30 to US$40 per barrel, the company would not stop oil production in Guyana. “Given the FPSO (floating production, storage and offloading vessel) is leased which accounts for almost 30-40% of the overall production costs, we do not see Exxon turning off the taps, provided there are available export tankers in this oversupplied market,” he said.

Brent price was about US$26 per barrel on Thursday. Rystad Energy estimates that the production costs from the Liza 1 field is about US$7 to US$9 per barrel.

Asked why would ExxonMobil want to continue pumping oil from Guyana at US$25 to US$30 per barrel, Ravi noted that ExxonMobil is “the world leader in terms of both exploration and production.” “They have been at the top for so many years and they are in this oil deal for the long term. They are not a reactive company,” he said.

Oil prices have tumbled in recent weeks due to a slump in global demand for fuel for air, land and sea transportation due to the global COVID-19 pandemic. This has been worsened by the OPEC group of oil producers and its non-OPEC allies failing to reach agreement on extending cuts in oil supplies after March 31.

Looking ahead, Rystad Energy does not believe that oil prices in the US$20s and US$30s per barrel would be sustainable and so “wipe out a lot” of shale oil production in the United States, “essentially leaving the market under-supplied” by 2021. “Because of that, prices towards the end of 2021 and 2022 could be higher than what you see so US$30 per barrel is going to be short-lived,” Ravi said. In that regard, he predicted that Guyana would not be hard hit in the long term when the oil prices hit US$50 to US$60 per barrel again. “We don’t think that it has any sort of significant impact in the long term. At the max, what we believe is that all the cash flows that the government expects can be expected to be delayed by about six to eight months on a yearly basis but that is something I would say extremely in the long term,” he said.

Ravi notes that Liza Destiny continues to ramp up production considerably and has now reached around 95,000 to 100,000 barrels a day. So far, five tankers carrying a total of around 4.8 million barrels have left the Guyanese ports. “That is one of the fastest ramp-ups we have seen in terms of production…so in that sense Exxon and Guyana have done a fantastic job and we see production ramping up,” he said.

The Rystad Energy Senior Analyst expected ExxonMobil to make final investments decisions (FIDs) on Payara-Pacora before year-end and Hammerhead over the next 12 to 18 months. He said even though the breakeven oil price for these projects are on the $30 to US$40 range, the uncertainty regarding the short-term and the long-term crude prices would prevent companies from rushing FIDs.

“Capital discipline is need of the hour,” he said, adding that the companies would need shareholder approval and secure loans

Ravi said Rystad Energy believed that ExxonMobil would delay its FID on Payara-Pacora into the second half of 2020.

The analyst said front-end engineering work could also be delayed at Hammerhead due to the coronavirus pandemic and uncertain market conditions may put some downward pressure on service costs “and operators may want to leverage that.” “Hence, could be a wait and watch scenario from an operator point of view,” he added.

Ravi forecast that over the long term, activity could be affected slightly as the market returns to normalcy. He added that there could be a flood of new developments which could potentially lead to lower competition for FPSO awards as floater specialists would have several projects to choose from, resulting in a spike in costs.

The coronavirus, he said, could also take a toll on the construction time of the second FPSO, Liza Unity, and ultimately the project start-up. “As of now, it is extremely hard to pin-point on how much the project would be delayed. However, it is likely that the startup could slip by 3-6 months as quarantine measures in China in 1Q (1st quarter) and the lockdown measures in 2Q (2nd quarter) outside China would result in slower progress over the entire supply chain.”

In terms of exploration, the Rystad Energy analyst said operators are expected to scale down budgets and “this would have an immediate impact on new-field exploration.” He was quick to point out, however, that Exxon would not likely scale down activity in Guyana where it has three rigs in operation until the end of 2020 and recently added a fourth.

Rystad Energy describes itself as an independent energy research and business intelligence company providing data, tools, analytics and consultancy services to clients exposed to the energy industry across the globe.

Previous: CXC modifies its exam process due to COVID-19
Next: COVID-19: Police to crackdown on public gatherings