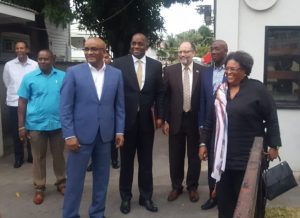 Opposition Leader, Bharrat Jagdeo Wednesday night said he told several leaders of the Caribbean Community (Caricom) here in Guyana that the regional grouping could assist in overseeing a recount of votes cast in Region Four if reconciliation of statements of poll show glaring discrepancies.

“Caricom can help to ensure that there is a proper verification, and verification, as provided for in our laws, have two elements – the SOPs (Statements of Poll) and the recount,” Jagdeo, who is also the General Secretary of the People’s Progressive Party (PPP), told reporters shortly after meeting with the delegation of regional leaders. “We are saying now before any person is sworn in, you have to follow the two verification that the international community has been asking for, including Caricom,” he added.

Jagdeo said if there is a dispute, there should be a recount of all of the boxes at a central location of the Guyana Elections Commission (Gecom) in the presence of the media, and international community and observers. “Whatever the results of the recount in those boxes, we will live with it,” he said.

They were all very tight-lipped and preferred to speak on Thursday at a collective press conference, except for Mitchell who remarked that “progress is occurring. We (are) getting some progress…We are happy with how things are going.”

Jagdeo told reporters at his Church Street, Queenstown, Georgetown office that he was suspicious of Returning Officer, Clairmont Mingo and since he had declared results for Region Four on March 5, the Statements of Poll most likely ended up in the wrong hands of unauthorised persons.

“We expressed fears that the SOPs (Statements of Poll) – the chain of custody has been broken and there is a chain of custody that was zealously guarded but since the stopping of the process, those documents have been with some Gecom staff and the RO (Returning Officer) and they are the same ones who made the fraudulent declaration so the SOPs can be compromised,” he said.

With the High Court earlier Wednesday having ruled that that declaration be scrapped because the Returning Officer violated the Representation of the People Act and that reconciliation – whether restart or continue – should begin on Thursday at 11 am, Jagdeo said he was wary that Mingo might go ahead and use flawed statements of poll. At the same time, he said the PPP and observers have sufficient evidence to dispute any bogus SOP. They include tally sheets signed by presiding officers, the Chief Elections Officer’s SOPs signed by two commissioners, and several pictures of those SOPs taken by observers and other persons outside polling stations.

Questioning why the opposition to ending the controversy by having a recount, Jagdeo cautioned that if David Granger is sworn in the region, the international community will not recognise him.

Meanwhile, the Ministry of the Presidency quoted Mr Granger as saying that he would not reject the declaration. “I am committed to the rule of law and the Constitution. We will abide by the declaration of the Elections Commission. Like all of Guyana, we are waiting for the declaration,” President Granger said.

The Head of State reiterated that the seven-member Gecom is independent. “We have respected the integrity and autonomous nature of the Elections Commission. We respect the Courts, as independent from the Executive and will abide by the decisions of the Court,” the President assured the Caribbean leaders.

Prime Minister Mottley said the regional leaders have traveled to Guyana to find an amicable solution to the challenges facing the country’s leaders. She said it is undesirable to see the loss of life, injury, and damage to property. “We are conscious that the court has ruled and that the process [validation] has to be continued. We [Caribbean leaders] do not want to see the loss of life, damage to property or injuries,” PM Mottley said with the full agreement of the other leaders.

President Granger was accompanied by Prime Minister Moses Nagamootoo’ Vice-President and Minister of Public Security, Khemraj Ramjattan; Director General of the Ministry of the Presidency, Joseph Harmon, and Minister of State, Dawn Hastings-Williams.