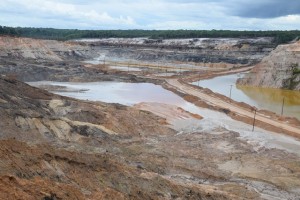 The Montgomery Mine in Linden being operated by China’s Bosai Minerals Group.

Guyanese workers at Bosai Minerals Group (Guyana), a bauxite company in Linden, are concerned about the arrival of at least five Chinese from mainland China who have since been quarantined in their rooms as a precaution against the potentially deadly coronavirus (Covid-19).

However, Bosai General Manager, Eric Yu said the Chinese nationals, who are from Chongqing, passed through Germany where there are sophisticated health checks of passengers.

Yu confirmed that, at the same time, the Chinese arrivals have since been quarantined in their rooms at Fairsrust, Linden, for 14 days as a precautionary measure. Told that there is some unease among Guyanese workers who were contemplating strike action, he said that would be illegal and the union ought to notify management. “The workers are agitated,” one of the workers said of his colleagues who are on the night shift.

Spokeswoman for Bosai, Vanessa Mitchell-Davis, who said she was on leave, downplayed the likely health risks of allowing the Chinese to enter Guyana. “They were not allowed to travel from China straight to Guyana; the Guyana immigration allowed them to enter so I don’t see a problem,” she told News-Talk Radio Guyana 103.1 FM/Demerara Waves Online News. “There is no straight flight and they had to pass through several ports,” she said.

The Ministry of Foreign Affairs and the Ministry of Public Health on January 31, 2020 jointly said persons arriving in Guyana from China are “likely to be denied entry” and “will be subject to quarantine protocols and may be quarantined in a health facility or at home, depending on the outcome of the risk assessment.”