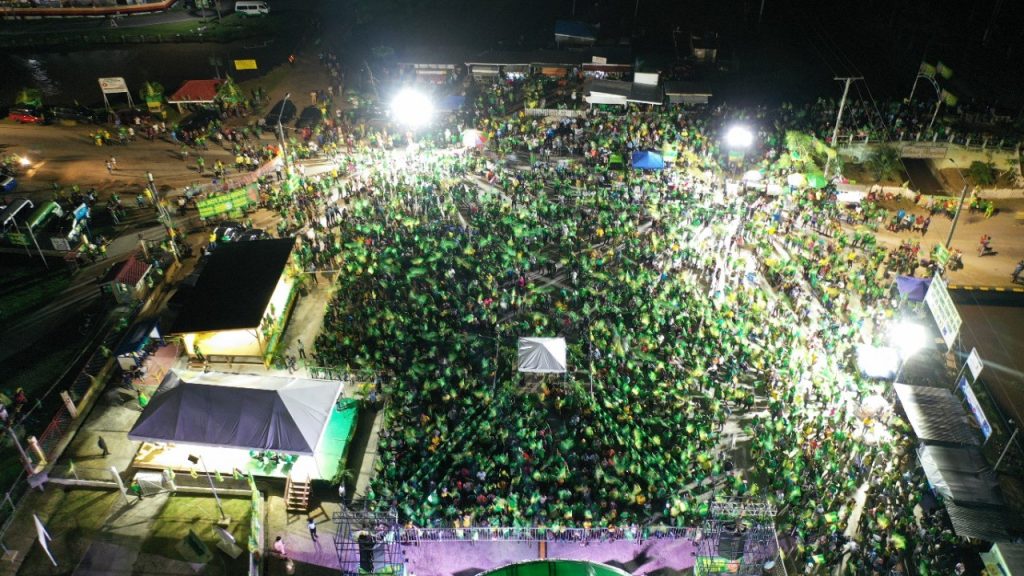 The bulk of attendees at the APNU+AFC rally at Anna Regina town, Essequibo Coast.

President David Granger has announced that Cabinet has agreed to dole out some of the oil money to get poor Guyanese children to school.

He made the announcement Wednesday night at a 2020 general election campaign of his A Partnership for National Unity+Alliance For Change (APNU+AFC) at Anna Regina, a town on the Essequibo Coast.

“We don’t want to put oil money into the hands of rich people. We want to put money into the hands of your homes, your households and that is why Cabinet has deliberated. We are going to ensure that every family that gets children to school to get a cash grant to keep that child in school. The money will be coming to you. It’s your money,” he told supporters in what is historically regarded as a stronghold of the opposition People’s Progressive Party (PPP).

The Working People’s Alliance (WPA) had more than two years ago introduced the idea of cash-transfers, with an emphasis on direct transfers of about US$5,000 per household with emphasis on health, education and entrepreneurial development as recipients see fit.

The PPP, which had introduced a GYD$10,000 per school-age child cash grant before it lost the 2015 general election, is for the 2020 elections promising a return of that money and eventually increasing it to GYD$50,000 per child.

Both APNU+AFC and the PPP have also promised a return of free education from nursery to university. Granger has already promised in his New Year’s address “tuition-free education for eligible students at the University of Guyana.”

The WPA’s direct cash-transfer model was, however, frowned upon by the PPP and APNU on the grounds that it would encourage laziness. Both major parties had also noted that even before the oil revenues government had transferred funds to various social programmes.

Previous: Man burnt while rescuing children from burning house in Mahdia
Next: Labour summons RUSAL-BCGI to key meeting over layoff of 288 workers