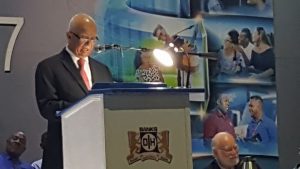 Banks DIH Limited says it is continuing to add value to Guyana’s rice, a move that has seen the company earning US$1.956 million from the export of Banko Wine.

“Banks DIH has and continues to play its part in the field of agro-processing and is the largest private sector agro-processor in the country,” the company said in a statement.

Banks DIH says it will be purchasing two more fermenting tanks, and bring the total number of tanks to four. The two new fermenting tanks, according to Banks DIH, can hold 27,000 gallons of liquid which is converted into Banko wines.

Banks DIH boasts that last year, it purchased 2,000,000 pounds of rice for the manufacture of Banks Beer and Banko wines.

The company says during financial year 2019 it purchased for the manufacture of Banks Beer and Banko wines, 2,000,000 pounds of rice to support the capital investment of approximately GYD$182 million made over a three-year period.

Banks DIH says it continues to play its part in the field of agro-processing and is the largest private sector agro-processor in the country.

The company says it has been using rice in beer manufacturing since 1957, and in the 1980s had used cassava and rice flour to make snacks and cereals.

Banks DIH says that project was discontinued because sourcing cassava from the farmers was not economical and the mill was closed.

Previous: NCN announcer’s APNU+AFC candidacy at centre of Editor-in-Chief being sent on leave
Next: OPINION: Revamping Exxon deal: the company couldn’t at this time, even if it wanted to…