Two students of the Linden Foundation Secondary School were Friday morning arrested in connection with the near fatal stabbing of one of their female schoolmates Thursday afternoon, police confirmed. 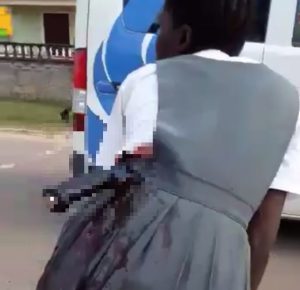 A blurred screen grab of video showing the knife in the injured student as she sought help to be transported to a hospital.

Police were told that the incident occurred shortly after 3 pm outside the Linden Foundation Secondary School, in full view of several students of the school and at least two adults were seen in a social media video of the incident.

The wounded student was reportedly in critical condition and was communicating in a limited manner.

Region 10 (Upper Demerara-Upper Berbice) Police Commander, Hugh Winter told News-Talk Radio Guyana 103.1 FM/Demerara Waves Online News that the students, 12 and 14 years old, were arrested at about 7:30 am. The Juvenile Justice Act says no child under 14 years old shall be capable of or guilty of committing an offence.

He said they were in police custody and would be questioned in the presence of their parents and school welfare officers.

Winter said investigators have already seen the video and have identified the alleged perpetrator. In the video seen on social media, a six-inch Rambo knife was stuck in the child’s back as blood spurted from the wound. She was rushed to a hospital in a car driven by a public-spirited citizen.

After the girl was stabbed, many of her schoolmates left the scene as she sought help from passersby to take her to the hospital.

The law states that if a child is charged, the Director of Public Prosecutions, the prosecutor or the attorney-at-law representing the child shall request of the court an evaluation of the child by a suitably-qualified person at the expense of the state.

The outcome of the assessment — of the cognitive, emotional, psychological and social development — of the child will determine whether he or she should be treated as a juvenile and if the presumption is not rebutted the court shall refer the child to the Director of the Childcare and Protection Agency to be dealt with under the Protection of Children Act and the Director of Public Prosecutions shall withdraw the charge.