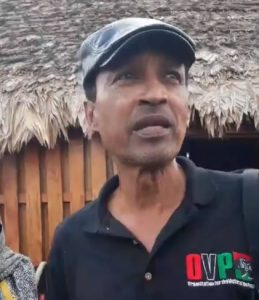 Leader of the Organisation for Victory of the People, Gerry Perreira.

The Organisation for the Victory of the People (OVP) political party hopes to take control of the Region 4 (Demerara-Mahaica) council in the hope of securing land distribution or it would urge Guyanese to occupy lands.

Presidential candidate, Gerry Perreira told reporters on Nominations Day said if his party gains electoral control of that Region 4 Council, it would demand that the Guyana Lands and Surveys Commission fast-track the processing of land applications going back 15 years ago.

“Failing to do so, we will encourage the people of Region Four to occupy the land and we make no apologies for that,” he told reporters after submitting his list of nominees to the Guyana Elections Commission (GECOM) for the March 2, 2020 general elections.

He expressed concern that foreigners were coming to Guyana and getting lands in a jiffy, while descendants of African slaves and indentured East Indians are still waiting.

Regional councils can make decisions, but some of them require authorisation or approval by central government agencies.

Perreira, known for his anti-imperial/anti-neocolonial stance, hoped that land reform would eventually create the conditions to catapult OVP into the national seat of power. “The most we can, because we have minimum resources, is to fight at the regional level and then when people start to see results, then maybe they will say OVP is the people for the country,” he said.

He is urging supporters “not to put all their eggs in one basket” by voting for A Partnership for National Unity+Alliance For Change (APNU+AFC) for parliament and OVP for the Region 4 Council. “We are contesting Region 4 because it’s a big region and it’s very strategic and inasmuch as we have sharp ideological and political differences with the ruling coalition, given the contradiction we are voting APNU+AFC at the top and we are asking the electorate not to put all their eggs in one basket and to give OVP Region 4 and a Region 4 controlled by OVP will be no-nonsense. We are talking about people’s empowerment and we are talking about holding those at the top in check,” he said. Perreira made it clear that his party did not want to see the opposition People’s Progressive Party back in office.

The OVP Leader said his political party continues to campaign in between elections, educate and raise awareness in communities as “we don’t pop up at election time.” “What we have noticed before our eyes is that we are giving up the resources of our country for nothing and this is being re-colonised before us,” he said.

OVP said other political parties believe in neo-liberal economics and they are allowing the American, British and Canadian governments to “dictate to them.”