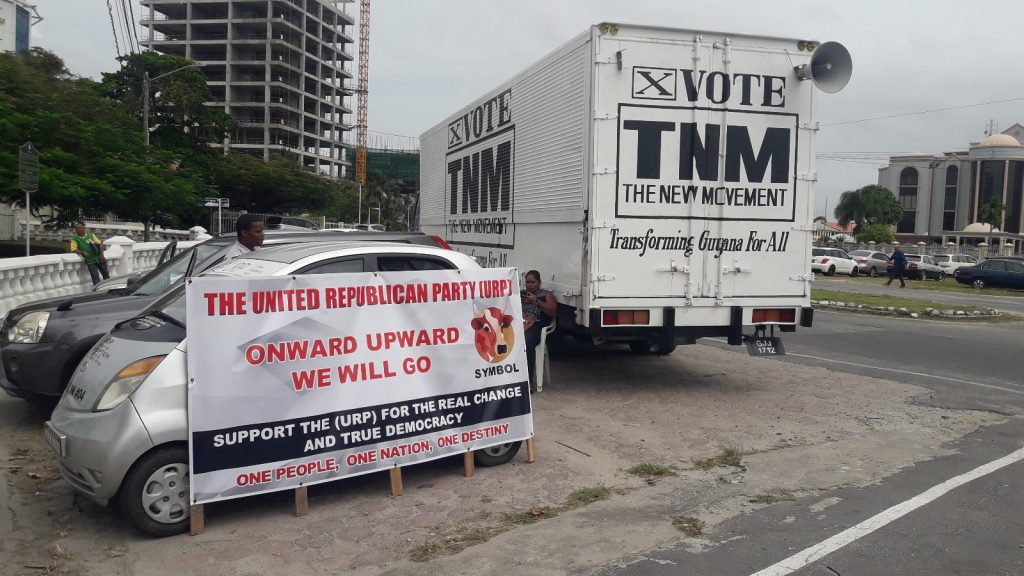 Friday is Nomination Day for general elections that are less than 60 days away.

Already, parties are lining up outside Umana Yana in Kingston, Georgetown, where they will be submitting candidates from 1 p.m. to 5 p.m. Friday.

Traditionally, City Hall has been the seat for Nomination Day but due to the dilapidated condition of that building, the elections commission has decided to use Umana Yana.

In the queue since early Thursday are smaller parties A New and United Guyana, United Republican Party and The New Movement.

Undoubtedly, Guyana’s two largest political organisations — A Partnership for National Unity+Alliance For Change (APNU+AFC) and the People’s Progressive Party (PPP) — are gearing up to march through the streets of Georgetown to Umana Yana.

APNU+AFC’s contingent is expected to move off from Parade Ground and the PPP’s from its Freedom House headquarters on Regent Street.

Nomination Day for the general and 10 regional administrative council elections are coming at a time when the political contest is heating up mainly between the incumbent APNU+AFC and the main opposition People’s Progressive Party Civic (PPPC).

Insiders say several changes look set to happen in the APNU+AFC list of candidates and eventual ministerial appointments if the coalition wins the March elections.

Already, News-Talk Radio Guyana/Demerara Waves Online News can confirm that Agriculture Minister Noel Holder is bowing out of politics. He says he has enough of politics and it is time to make way for young people.

Minister of Communities, Ronald Bulkan is also not likely to be a candidate on the APNU+AFC list come Friday. He dodged several questions including whether he was available to be on the list of candidates and was no longer interested in being a candidate.

A number sources close to APNU+AFC indicate that it is too early to say whether Simona Broomes and Valerie Adams are unlikely to be retained as ministers if the coalition wins again. The fate of two other APNU+AFC ministers also hangs in the balance. Analysts observe that Attorney-at-Law, Roysdale Forde, who was recently appointed Senior Counsel, may very well appear on the coalition’s list of candidates.

APNU+AFC presidential candidate, David Granger has already said there would be a rebalancing of government should his coalition retain power come March 2.

Previous: Free education, other promises will be phased in because Granger administration is “splurging” funds -Jagdeo
Next: ANUG and FED-UP coalesce; Change Guyana, Citizenship Initiative still in talks