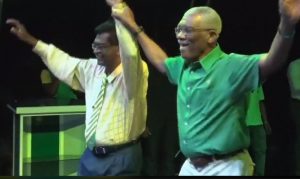 Presidential candidate for A Partnership for National Unity+Alliance For Change (APNU+AFC), David Granger Wednesday night for the first time publicly announced that AFC Leader, Khemraj Ramjattan would be his prime ministerial running mate, even as he issued a stirring appeal for supporters to vote out the People’s Progressive Party (PPP) from controlling Region 5 (Mahaica-West Berbice).

“Khemraj and I have signed on the dotted line. Khemraj Ramjattan will be my prime minister,” he said to rousing applause at an APNU+AFC rally at Hopetown, West Berbice. APNU and AFC on December 24, 2019 signed a revised political agreement named the Cummingsburg Accord after protracted negotiations.

Granger’s announcement effectively ends speculation in some quarters about whether he would likely pick someone else over Ramjattan if the coalition wins the March 2, 2020 general elections. Prior to Wednesday night’s clear-cut announcement, there had been suggestions in some quarters that Granger might have been leaving the door open to retain incumbent Moses Nagamootoo whose performance he has praised, Dawn Hastings or Volda Lawrence.

Before finally making the definitive announcement as he came towards the close of his speech, Granger had repeatedly referred to Ramjattan. “Khemraj and I are going to win a great victory for Region 5. We are going in together because we are better together, we are stronger together, we are moving forward together…” and “you have heard from my Prime Minister, Mr, Ramjattan…”

After Granger ended his speech, they held hands and danced together on stage.

Granger, who is Guyana’s incumbent President, urged party faithful and residents of Region 5 to vote solidly for APNU+AFC and remove the People’s Progressive Party Chairman of the Regional Administrative Council who was obstructing progress. “We have a political problem in this region and the political problem is the PPPC and we have to solve this problem on the 2nd of March,” he said.

Vowing not to lose Region 5 again, he promised to make that region the agricultural powerhouse in Guyana, upgrade the Bygeval Multilateral School to an ‘A’ Grade secondary school, and open more farming lands through the Mahaica/Mahaicony/Abary-Agricultural Development Authority, and further improve the quality of health care. “We have a chairman in this region who refuses to cooperate with central government. He refuses to cooperate with the Ministry of Communities. He is the one who is holding back development in this region. I put my cards on the table…I want you to elect an APNU+AFC Chairman of Region 5 so that we can develop this country,” he said.

Granger noted that APNU+AFC lost Region 5 at the 2015 general elections by 3,228 votes.