APNU+AFC coalition urges youths to go out and vote 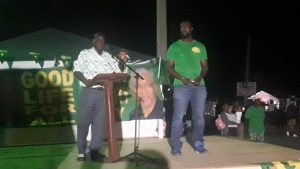 The incumbent A Partnership for National Unity+Alliance For Change (APNU+AFC) Tuesday night in the East Coast Demerara village of Buxton appealed to youths to go out and vote because there has been an reduction in crime, improved drainage and roads as well as social welfare programmes.

Prominent teacher and village leader, Deon Abrams, in his address, targeted young people, some of whom believed that the David Granger-led APNU+AFC administration has not delivered since coming to power in May, 2015. Abrams said “I have a great concern about what is going to happen” on General Election Day, March 2, 2020. “I’m a bit concerned because too often I hear the negative comments of our young people who continue to claim that the APNU+AFC in a short space of four years has done little or nothing for them and so they feel despondent, dejected and they want things that they believe should happen for them,” he said.

He recommended that adults talk with youths about developments under the APNU+AFC administration, “When you hear them speaking negatively about the APNU+AFC, when you hear them saying that they are not going to vote, I want each of us who is conscious to have a conversation with them…Reason them; make them understand the importance of the decision that they have to make and you must win each and everyone of them over because every single vote is critical. We cannot afford to miss a single one,” he said.

Abrams, a former communications lecturer at the University of Guyana, reasoned that the perception that nothing was being done was due to no careful analysis of what the coalition inherited in 2015 and the requirements to take Guyana out of those doldrums. He reflected on the “troubles” of 2002 to 2005 in his home village of Buxton that had resulted in the death of several persons which still leaves many in mourning. “We lived in fear, we lived in terror and in spite of what the PPP wants to say, what they claim, they were the authors of that period. They dictated what transpired here in our village,” he said. Abrams questioned why Guyanese, in particular Buxtonians, were so willing to forget that period.

He contended that those who claimed nothing has been happening in Buxton are ignoring the fact that more than 190 students are given free classes along with meals everyday that are funded by the First Lady’s Office. Her office is also funding computer classes. “We cannot achieve all that we want to achieve in four short years and that is a fact and if we are to compare, we cannot compare twenty-three years with four years. If we make that comparison, we have to look back and see how we have benefitted in ways that we have not benefited in twenty-three years,” he said. Other areas in which Buxton is benefitting include the development of drainage and irrigation as part of steps to reopen farm lands under a US$18 million project.

Another area of concern by Abrams was the deprivation of Afro-Guyanese in parts of Berbice and Linden as well as the admitted failure by the last administration to employ Afro-Guyanese as ambassadors. Abrams assured that the Granger-led administration would not discriminate against any race. “President David Granger will not preside over a government that seeks to exclude any race in this country fro the benefits that we can acquire from the resources that we have and so we must congratulate the President for his vision,” he said.

Working People’s Alliance (WPA) executive member, David Hinds added that Guyanese need to vote for the coalition because Granger brought back dignity to the presidency, APNU+AFC has given poor people a chance, it is the first government in which political opponents have not been killed, respected human rights and “put an end” to phantoms. “Sisters and brothers, no political party is perfect, no government is perfect but you have got to make a rational choice and the rational choice is that you have to go with the one that is better able to take care of your lives,” he said.

The WPA had over the past three years been harshly critical of the APNU+AFC-led administration, even warning that it could lose the next general elections.

He urged the gathering not to waste their vote for by staying home or voting for the PPP or any of the small parties, but see it as an “investment” in the future.