Oil prices jump after top Iranian general killed by US

Reproduced from the BBC News 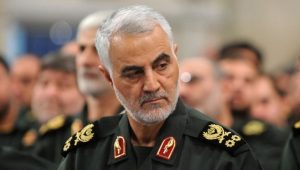 Oil prices have risen sharply after the killing of a top Iranian general in Iraq.

Analysts warned the action could escalate tensions in the region and affect global oil production.

The price of Brent crude jumped by more than 4% to hit $69.50 a barrel at one point, the highest since mid-September.

It came after General Qasem Soleimani was killed in a US drone strike at Baghdad airport, which the Pentagon described as “defensive action”.

The price spike pushed oil stocks on the London stock exchange higher, with BP up 1.5% and Royal Dutch Shell 1.4% higher.

Tensions between the US and Iran had been rising since the US pulled out of a nuclear deal between Iran and other countries.

This aimed to curb Iran’s nuclear programme and prevent it from developing nuclear weapons. The US has also reimposed sanctions on Iran.

This recent strike has sparked fears of increased risk to energy supplies in the region.

Several of the world’s biggest oil producers can be found in the area, which could be affected if there were a wider military confrontation involving Iran.

As much as a fifth of global supplies pass through the Strait of Hormuz, a narrow passage which provides access to the Gulf. 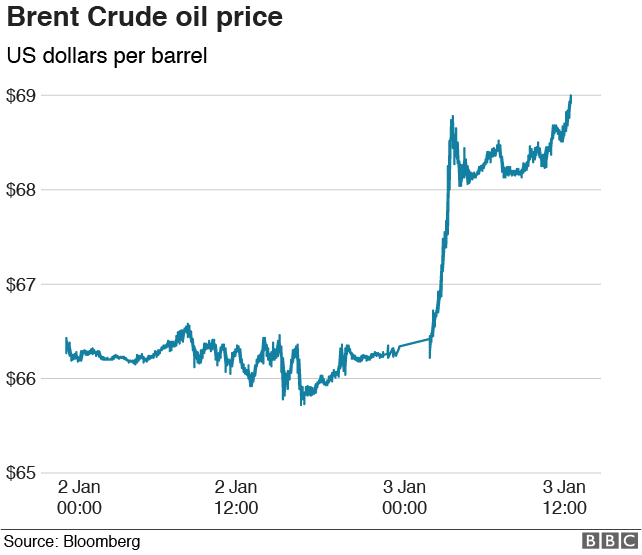 What does this mean for oil markets?

The potential disruption to the global oil market from conflict in the Gulf is severe.

The US Energy Information Administration estimates that 21% of oil used in 2018 passed through the Strait of Hormuz, a narrow passage which has Iran on its northern shore.

Some of the biggest producers would be affected if the Strait could not be safely navigated. Saudi Arabia, Iraq, Kuwait, Iran, UAE and Qatar all ship some or all of their exports via the Strait.

Saudi and the UAE have pipelines that bypass the Strait but they have nowhere near the capacity to take all the oil. There is also the possibility of Iranian military action against other countries’ oil installations.

Last year there was a drone attack on the Saudi industry. Houthi rebels from Yemen claimed responsibility and they are widely seen as having Iranian backing.

Previous episodes of Middle East conflict have seen higher oil prices which contributed to global economic slowdowns, from the mid-1970s to the early 1990s.

What is different now, and what might moderate the impact, is the presence of the US shale industry, which can respond relatively quickly to supply shortfalls and higher prices.