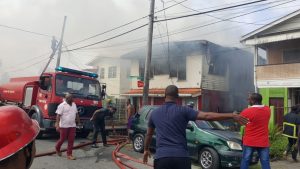 A tenant collapsed and subsequently died as he saw fire destroying the house in which he lived on Princes Street, Wortmanville, Georgetown.

He is reportedly a driver at the Ministry of Indigenous Affairs.

Eyewitnesses said Northe was returning home when he saw the house on fire. He collapsed and later died while receiving medical attention at the Georgetown Public Hospital Corporation.

The fire started in a back bedroom of the two-flat house. Investigators were trying to ascertain whether the fire was linked to a grievance between the landlord and one of the tenants.

Landlord, Gordon Copeland said he and five tenants lived in the building.

He said the court recently gave one of his tenants two months to vacate the premises after she had owed him rent. The woman was not at the scene of the fire.