The Guyana Elections Commission (GECOM) Monday night said 6,534 of the 16,863 new voter registrants were not confirmed during a five-day field verification exercise.

Ward said the more than 6,500 others could not be verified for various reasons including not being at home at the time scrutineers and GECOM personnel visited. 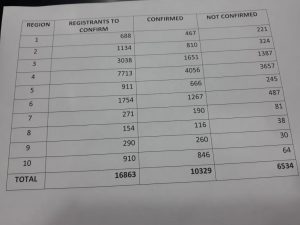 GECOM-released figures of the distribution of verified registered voters across Guyana’s 10 administrative regions.

Opposition People’s Progressive Party election commissioner, Sase Gunraj said he and his fellow commissioners “had a lot of questions” at a meeting held on Monday. He declined to give details, but was optimistic that they could be answered by Tuesday.