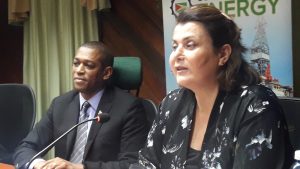 The Ministry of the Presidency’s Department of Energy on Monday denied breaching the procurement process for sale of Guyana’s first three million barrels of oil aimed at what officials say is the removal of impurities and setting of standard for Guyana to get the best price for its oil.

“This is sale; this is not the procurement of a good or a service…It doesn’t require going through a procurement process,” Head of the Department of Energy, Dr. Mark Bynoe said. He further explained that only when Guyana launches a Request for Proposals, that that would go through the National Procurement and Tender Administration Board.

He said before calling in ExxonMobil, Hess, China National Oil Company, Shell, Chevron and British Petroleum to come to Georgetown this week hoping to wrap up the deal, the Department consulted with the Public Procurement Commission “to ensure that we were not contravening any of the laws of Guyana as such.”

Crude Marketing Specialist, Virginia Markouizue said Guyana could not seek a Request for Proposal (RFP) at this stage because the aim is to first ensure that a designated refinery extracts the impurities and ascertains the true quality of the oil based on standards and stability. “They are very much aware of the intricacies of introducing a new grade into the market…The most important thing is that they can help us introduce a grade into the market in a very standard way,” she said.

Markouizue explained that the RFP would be issued for one-year marketing contracts for the sale of Guyana’s entitlement of oil. The renewal of the contract would be based on the performance of the marketer and the price. The Crude Marketing Specialist said if Guyana had gone through the RFP process before testing the true quality at a reputable refinery, Guyana would not know the “real fair market value of our crude”.

“What we are trying to do is test it, run it through a refining system, take the feedback from the refiner, from the people who have not just refining but also the marketing channels. They have the value of the pump, of the petrol all around the world. We want to run it through systems who will give us the feedback of what is the fair market value at this point so the RFP would have been too premature and most probably would not allow us this introduction of the grade as such and that’s what we are trying to achieve here,” the Crude Marketing Specialist said.

She said Guyana would not be charged for transporting the fuel from Guyana to the refinery.

The Department of Energy Chief said the decision was made after advice was provided.

Oil is expected to be extracted some time during this month. ExxonMobil, the majority of shareholder in Esso Exploration and Production Guyana Limited which is entitled to the first million barrels of oil, has said it would be using that entitlement to conduct similar tests.