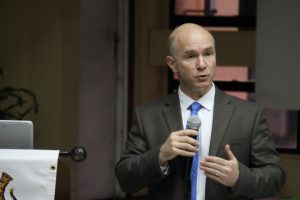 The United States (US) will have to ensure that the opposition People’s Progressive Party (PPP) sticks to its promises to keep a lid on corruption, with the likelihood of that party winning next year’s general elections, a senior advisor at the US State Department asserts in a recent assessment of the political and security situation.

“At the same time, given concerns regarding corruption in prior PPP administrations, while the US should embrace and work in good faith with a future PPP government, it must do so with its eyes open, holding the PPP to account with respect to its commitments to transparency, democracy, and commitment to free market and the rule of law,” Dr. Robert Evan Ellis states in his contribution titled “Security Challenges in Guyana and the Government Response” in Journal of the Americas, a US Air Force publication.

Ellis, who was a research professor of Latin American Studies at the US Army War College, forecasts “the likely return of the PPP to power “at the next general elections, but he did not give any reason for his conclusion. In that regard, he noted that the PPP’s leadership is talking about a new generation of infrastructure and other projects likely to be built by the Chinese and funded by the revenues from oil. Those projects include the Amaila Falls hydroelectric project and an interconnection to the Brazilian power grid, likely to be built by a major Chinese company active in Brazil such as China State Grid, or State Power Industrial Corporation, the construction of a deep water port near Berbice, and an associated road and rail link to Brazil.

The research professor notes that allegations of corruption that had been levelled against the then PPP governments had been compounded by its connections to Venezuela and China. “While the PPP governments which preceded it manifested relatively competent administration and a probusiness orientation, the accusations of corruption, and their level of cooperation with leftist populist regimes such as Venezuela, as well as the PRC, arguably caused discomfort in Washington.”

The State Department advisor, who helps formulate and coordinate foreign policy recommendations on Latin America and the Caribbean for the US Secretary of State, also suggests that Washington will have to find the right balance with China and Russia. Tracing China’s role in providing material assistance and training to the Guyana Defence Force and the Guyana Police Force over the years, Ellis recommended that the US government provide support to Guyana at a reduced cost although the country will under normal circumstances be ineligible due to its expected huge earnings from its oil and gas sector.

“Nonetheless, the US must be prepared to ask for special exceptions to these laws, recognizing that extra-hemispheric competitors to the US, PRC (People’s Republic of China), and Russia are likely to increase their own offering for training and exchange programs for the Guyanese beyond what they currently provide.

“While the US has a compelling case regarding the value of its own programs, and while the Guyanese government must naturally pay a fair share of their cost, the US must offer such programs at a cost and under conditions that make them attractive to the Guyanese government to work with the US and not just PRC as a partner,” said Ellis who has written numerous analyses of the political relations between Guyana and China.