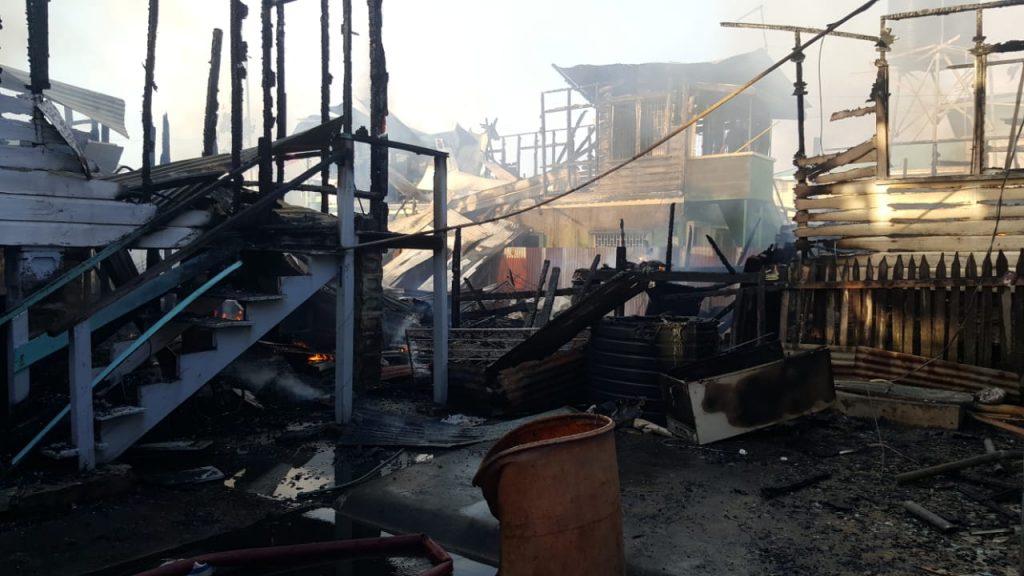 The fire started at about 5:53 a.m., and one hour later firefighters contained the blaze from spreading to other houses in that congested residential area of mostly wooden houses.

The fire started at Lot EE Bent Street near the window of one of the residents, Natasha Morrison.

She recalled smelling smoke while she was asleep and when she awoke, she observed a “fast” moving blaze and desperately tried to extinguish the fire before rescuing her children. “When I jump up and I look by the window, this fire just start from this window so by the time I jumped off my bed, go to the kitchen, get water to throw on it, this thing just start spreading all over, fast, fast, fast, just start running so all I could have done is wake my children out of the sleep. I don’t know how I get the strength… I just scramble them, run out naked skin as I born,” she said.

Morrison ruled did not believe that the fire was of electrical origin, but noted that she and the landlord have a property dispute. One of the fire victims said the blaze started at the back house and she and her family lost most o their belongings.

“We couldn’t even get to grab anything. The heat was so strong. We just get to come out, grab a couple of things. I am a teacher. I have no working clothes, nothing. All I was able to grab was my students’ report book and my mother working bag, my mother machine and the other one is in there. Everything else is gone,” said Shenia Ramdohar. She claimed firefighters arrived late and there was poor response to the 912 emergency name.

A senior officer of the Guyana Fire Service refused to speak with the media and left the scene in a car.