Spices mixed to perfection on show at GuyTIE 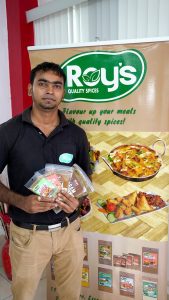 Lakiraj Singh and his three sons have carved out a special niche in the local spice market, and for a very good reason.

They don’t just crunch herbs and spices into bags and churn them out for a quick payback; the Singhs’ approach is much more precise and attentive. They prepare the finest Guyanese spices by using a mix of ingredients that is calibrated to retain a distinctly homemade look, feel, smell and taste. This approach has been extremely effective and is the key to the popularity of Roy’s Quality Spices. Now, their spices are prized by a growing number of loyal customers.

According to Govinda Singh, his father Lakiraj Singh stumbled into the spice-making business in the 1990s. Back in the day, country folk routinely mixed and ground their own spices with their ‘lorhas’ and ‘sils’ —traditional stone implements used in Guyanese kitchens to grind herbs and spices—to add the right burst of flavour. These homemade spices were much sought after by Guyanese living abroad who no longer had the time, implements or ingredients to make them.

One of Lakiraj’s friends, while preparing to go overseas on vacation, asked him to grind some ‘masala’ and ‘gheera’ to be taken to relatives and friends as gifts. Little did Lakiraj know that his friend’s simple request would be the beginning of a new chapter in his life. Lakiraj prepared the spices and when his friend returned he brought great news; the gifts were a big hit. The friend suggested that Lakiraj should prepare spices as a business and Lakiraj agreed to give it a try.

He started small, using his mother’s recipe to prepare a ‘garam masala’ mix and using a hand-mill to grind the ingredients. He also ground some gheera (cumin)—a go-to ingredient for dhal and curry dishes — and he packaged them by hand to retain their enticing aromas. It was hard work, but he loved it.

Govinda recalled his dad putting spices in small transparent plastic packages, sealing them with a candle flame and gluing handwritten labels on them. Then his father took his products to the Suddie/Anna Regina market and waited for sales. His homespun packaging was not ideal, but his products were fresh and their taste hit the spot.

At first, persons raised their eyebrows and examined Lakiraj’s little packets with thoughtful frowns. It was easy to read their minds: Would his dark powders replicate the exotic flavours they had grown up with and loved? A few decided to try and quickly realised that Lakiraj had reproduced the exact taste they would get if they prepared their own spices. Lakiraj soon had a growing market.

Govinda recalled seeing his father build up demand for the products. “Things were slow in the beginning because everyone was doing it themselves. However, we were able to deliver the same taste they liked when they ground it themselves,” he said. Encouraged, Lakiraj started grinding the main spices for curries. These were snapped up.

He became creative in the early 2000s, adding fried-rice and cook-up seasoning mixes. Govinda remembers that he and his brothers were asked to give feedback about meals prepared with new blends that Lakiraj was carefully adjusting to get the exact homemade flavor customers craved.

In time, Govinda said, the household got electricity, which they did not have when they started, and they began to grind spices in an electrical processor. Buyers’ response was overwhelming. Electrical power enabled them to push the business to new heights. Today, they have 37 different spices on the market and the business now operates a small factory.

Most of the ingredients for the spices are bought locally, and Govinda said they want to expand their factory to meet growing demands. But there are major challenges, such as the high cost of imported packaging. Additionally, some customers are reluctant to give up foreign brands, and some local retailers are either reluctant or do not want to sell the local spices in their supermarkets for reasons that are unclear.

Nevertheless, the business supplies many retailers and reaches customers across Guyana. One of the reasons for the expanded reach is their participation in the country’s first Guyana Trade and Investment Exhibition (GuyTIE) held in 2018. Govinda said this experience helped them to improve their packaging to meet international standards; this included providing more product information. The exposure from GuyTIE also helped them to get in to the St Maarten market.

With these gains in mind, Govinda said the business is ready to participate in the GuyTIE 2020 event scheduled for next May with new products and better packages. He and his father care deeply about customer satisfaction and will never sacrifice quality to go after profits.