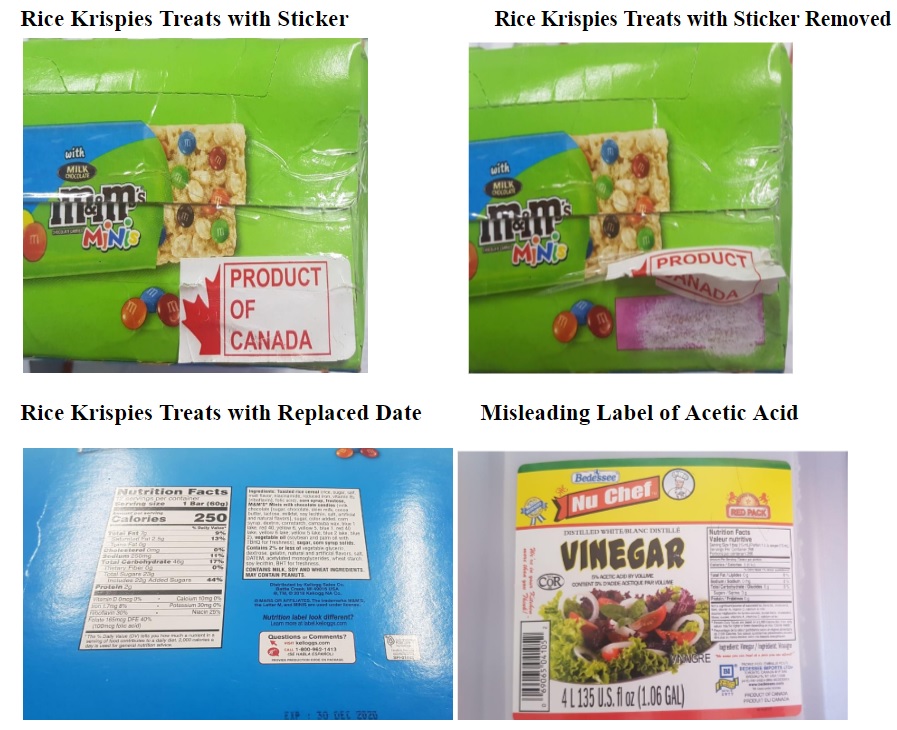 The Government Analyst-Food and Drugs Department released these labels to make out a case against the importer who has since rejected the allegations and has threatened to take the authorities to court.

The Ministry of Public Health’s Government Analyst-Food and Drugs Department (GA-FDD) and a businessman are set to take each other to court over GYD$40 million worth of food that authorities say are substandard.

The businessman, Faizal Asif Iqbal Alli, has denied the allegations levelled against him.

He is threatening to take the GA-FDD to court if perishable and other items are spoilt or lost. “You do appreciate that most of the items involved are perishables and therefore, time is of the essence. My client insists that I inform you that the total value of the two containers currently detained, approximate to a market value of, in excess of forty million dollars and if they perish or are lost, as a result of unlawful actions and or omissions, legal proceedings would be an inevitability,” states Alli’s lawyer, Anil Nandlall in a letter to the Director of the Food and Drugs Department, Marlon Cole.

They want Mr. Cole to immediately release the items, including non-food items, to which he has no objections.

Mr. Nandlall told Mr. Cole that Mr. Alli, is prepared to hire a qualified and internationally-recognized and experienced food analyst to conduct physician and chemical analysis of the items and report his findings. The lawyer told the GA-FDD Director that the food analyst will require his permission to conduct the tests in his presence.

Mr. Nandlall has given Mr. Cole until next week Tuesday, November 12, to respond.

If the Food and Drugs boss does not reply, Mr. Nandlall says he will assume that his letter has been ignored and he will take legal action immediately.

The GA-FDD alleged that the Canadian Food Inspection Agency attested to the wholesomeness of the products on a Health Certificate that was used to facilitate the trade of the items from Canada to Guyana.

However, based on examinations and sampling of the containers’ content, the Food and Drugs Department says expiry dates were deliberately removed and extended with a date marking machine.

Also, some of the damaged areas on boxes where the original date was removed are now concealed using a sticker bearing the Canadian flag.

The Guyanese food inspectors say they also found that some of the products were deliberately removed from the original container or packages and placed into bulk containers void of labeling details. All the items, the GA-FDD says, are suspected to be expired or short dated.

On that specific allegation, Mr. Nandlall told the GA-FDD Director that , “I am instructed that you sent out photographs of five different food items, along with the Press Release, which you claim were taken as samples from my client’s containers. However, my client denies that two of those items were imported by him and therefore, could not have been in his containers.”

Also, the GA-FDD alleges that most, if not all items of food were close dated with less than 75% of the shelf life remaining before importation of some items were labelled with misleading information.

The GA-FDD says it gave its reasons to the importer Mr. Alli and the Comptroller of Customs.

Government says its food inspectorate will urgently fan out to retailers across Guyana to locate the containers and the items that had been released without the GA-FDD’s participation. “Inspections will now be urgently carried out at retail premises across Guyana since two of the containers bearing substandard items were electronically released from the port of entry without the Department’s consent or approval on Friday 1st November 2019. Inspectors subsequently visited Mr Alli’s premises on Monday 4th November, 2019 and reported that none of the items could have been located,” the department says.

The Food and Drugs Department says legal action will be taken against Mr. Alli for allegedly knowingly or deliberately facilitating the importation and release of substandard articles of food to be used by Guyanese.