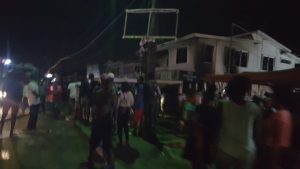 Several patrons were among the curious onlookers at the scene of the fire at Guinness Bar, Joseph Pollydore (D’urban Street), Lodge.

News-Talk Radio Guyana 103.1 FM/Demerara Waves Online News was told that all of the stocks and furniture were destroyed.

Representatives of the entity believed that the fire was of electrical origin. 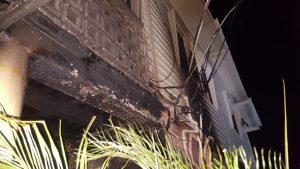 A section of the damaged building that housed the Guinness Bar.

The fire was contained to the lower flat of the concrete building located at Joseph Pollydore (D’urban) Street, Lodge.

At least 10 workers are now on the breadline, and Guinness Bar officials said they were unsure when the entity would be reopened.

Guinness Bar has been in operation for the past 17 years.

Owner of the establishment, Troy Mendonca said the landlord called and informed him of the fire at around 7:15 p.m.

He said the business was secured at 5 p.m. Sunday afternoon.