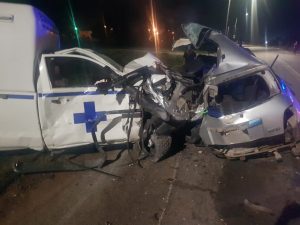 The vehicles that collided at Amelia’s Ward, Linden on October 26, 2019.

Reddock was an occupant of a Ministry of Public Health ambulance.

Traffic police investigators were informed that the ambulance was proceeding south along Obama Drive when Reddock collided with one of two speeding cars that was travelling in the opposite direction.

Both vehicles were lodged to be examined by a licensing and certifying officer as part of investigations.