No personal benefits from oil deals, no investigators – Robert Persaud 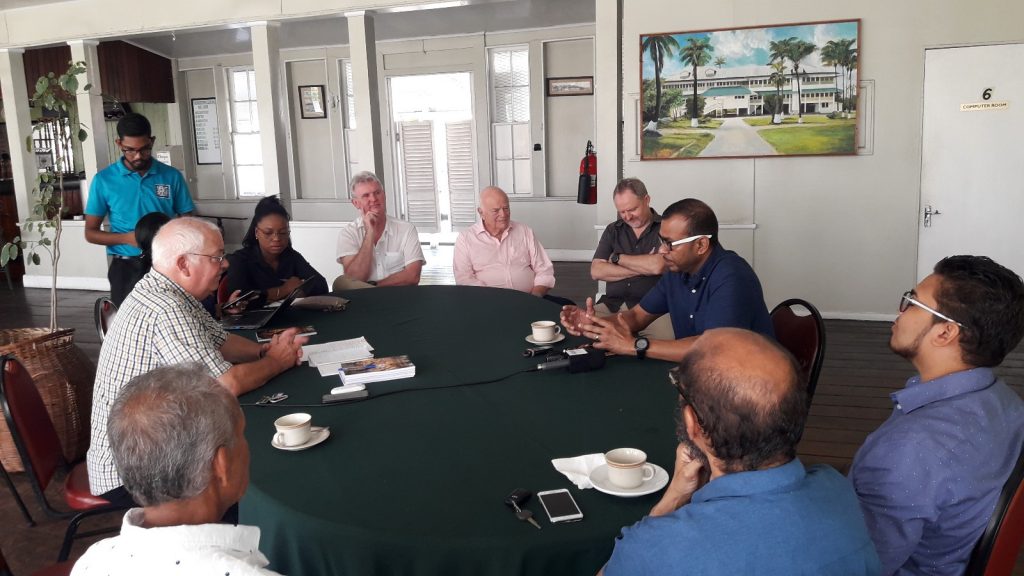 Former Natural Resources Minister, Robert Persaud (seventh from left) at an interactive session on the oil and gas sector, and Guyana’s political landscape.

Former Natural Resources Minister, Robert Persaud on Tuesday made it clear that he never benefitted financially from the award of a concession to Ratio Energy or any other oil company, and said no local or foreign investigator has contacted him.

“No, and it’s not my intention to benefit from any deal,” he said, adding that “I don’t perform my responsibility of having personal benefit. I want the country to benefit and that was my only objective.” He denied that there was any conflict of interest or connections with local partners.

He said Ratio Energy and Mid-Atlantic applied for offshore oil concessions in 2012 and received approval in 2013 “but because of the issue with Venezuela, they were put on hold… whilst there were engagements bilaterally and multilaterally with Venezuela to have this matter addressed. “After time had expired and there was no progress, a decision was taken to move forward with whatever other outstanding arrangements there were,” said Persaud.

In October, 2013 the Venezuelan Navy had intercepted a ship that had been conducting seismic surveys for United States (US)-based Anadarko Petroleum Corporation.

Asked to respond to questions by sections of the public that he seemed to have gotten rich very quickly, Persaud indicated that his earnings could stand up to scrutiny and he was unaware that working hard was an offence. “There is always the issue of perception and I would like anyone and I have made it very clear, whatever I have or business I have or anything I have, I am willing to have those checked out,” he said. He said “I am not sure I’m rich,” saying that he has other sources of income including the sale of a house at Pradoville and his family.

“There is absolutely nothing wrong in anyone working hard and building for themselves. It’s not a crime and I don’t apologise. I don’t apologise for whatever I have and the work I put into it,” he said.

Persaud said he was unaware that when he had assumed ministerial office he could not have worked for anyone else. “I didn’t realise that when I took ministerial office, me or my family, we were barred from engaging in business or any activities, but if you can point (out) that they were ill-gotten, then that’s a different issue,” he said.

Questions have been raised also in sections of the oil and gas industry about whether the award of 13,535 square miles of concession on the Kaieteur Block to the Israel-headquartered Ratio Energy and the Canada-based Cataleya Energy Limited on April 28, 2015, less than one month before the 2015 general elections, was above board.

The Guyana government’s State Assets Recovery Agency (SARA) has since said it has been probing how the concessions had been awarded by the People’s Progressive Party Civic (PPPC) administration to ExxonMobil and Mid-Atlantic Oil and Gas Inc. Mid-Atlantic has been granted permission to explore for oil at a 6,100-square-kilometer Canje block. Both Ratio and Mid-Atlantic have since farmed out their concessions to ExxonMobil. Persaud side-stepped questions about whether he thought the government should not have signed an agreement on the eve of the May, 2015 general elections.

He said no local or foreign investigators have contacted him about the award of any of those concessions.

SARA has reportedly written to several foreign oil companies indicating that a probe was underway to determine whether there was any irregularity in the Guyana government’s award of oil concessions.