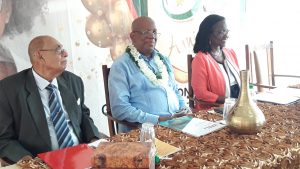 Finance Minister, Winston Jordan has cautioned the National Insurance Scheme (NIS) against investing its funds on the international stock market.

His comment came against the background of a suggestion by the Chairman of the NIS Board, John Seeram that the social security agency should invest on foreign stock markets.

“We will need to consider purchasing more attractive bonds and shares which are being traded on the global stock markets, as against renewing the terms of the securities. Going this route, and which is highly recommended, will require approval by the relevant authorities,” Seeram said.

His suggestion came against the background of low returns on investments such as the Berbice Bridge.

Mr. Seeram was at the time addressing an NIS 50th anniversary event at the Brickdam-based headquarters.

But Finance Minister Jordan told the same event that investments on foreign stock markets can see the NIS losing huge sums of money on the exchange rate. “You are going to be the learning so the earnings that you get adjusted for this difference plus inflation must be high enough for you to make that investment so don’t be big-eyed. You have to do the analysis to determine whether that bone over there is worth going after than this bone that you have,” he said.

Jordan also cautioned against investing overseas where NIS might not have jurisdiction over its money.

The Finance Minister urged the NIS to follow in the footsteps of Trinidad’s National Insurance Scheme by investing in real estate. He called on the Guyana NIS to work with the Central Housing and Planning Authority and commercial banks to satisfy the huge demand for housing and office space.

Mr. Jordan says real estate will yield quick returns than NIS is getting on Treasury bills. “Work with known groups because you are going to have a lot of carpetbaggers coming through with all kinds of fancy schemes that they want to use your money; they don’t want to take any risk,” he said.