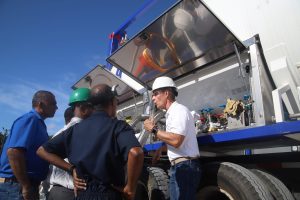 Mark Superville of Safety Pass Alliance Trinidad and Tobago (SPATT) Limited with DDL employees during the practical sessions of the LNG Training.

The terminal is located at Plantation Diamond, East Bank Demerara.

“We are very excited to be the first Guyanese company to use LNG for our power generation needs,” said DDL’s Chief Financial Officer, Vasudeo Singh.

“As part of our efforts to diversify our fuel supply to cleaner alternatives we studied the options and concluded that LNG or natural gas is a safe and proven fuel globally as well as here in the Caribbean region where it is being used extensively in Jamaica, Barbados and the Dominican Republic in operations similar to ours. We are also pleased to partner with ICON LNG who provided us a turnkey equipment and supply solution for regular LNG deliveries,” Mr Singh was quoted as saying in a statement issued by the company.

The company explains that LNG is natural gas that has been chilled to minus 160 Celsius, turning it into a liquid and making it safe to load and transport in specially designed containers. According to DDL, when warmed back to atmospheric temperature at DDL’s regasification terminal, the LNG becomes natural gas and is used to power electric generators and boilers.

Working with its Trinidad-based LNG fuel supplier, ICON LNG Trinidad Limited, DDL says it converted a pair of its diesel generators to dual fuel, which are powered on a mixture of natural gas and diesel.

This, the company says, is helping DDL become one of Guyana’s cleanest power producing companies.

To support the LNG operations DDL recently trained several of its employees in LNG awareness and safe handling procedures.