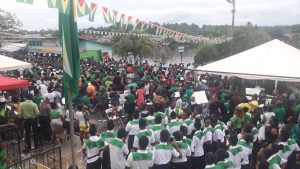 A section of the attendees at the PNCR’S 62nd anniversary rally.

President David Granger Saturday evening appealed to residents of Linden to again vote solidly for his People’s National Congress Reform (PNCR)-dominated coalition, citing a number of achievements including an end to drugs-related killings.

“We deserve another five years to conduct, to carry on the work we have started,” he told about 1,500 supporters at the PNCR’s 62nd anniversary rally outside the party’s Linden headquarters.

Linden is a traditional PNCR stronghold of mainly Afro-Guyanese, but the opposition People’s Progressive Party has been claiming some support and its activists have been visiting the mining town fairly often in recent months.

Granger promised that the PNC “will never let Linden down” and he would continue to fully embrace the town, having learnt his lesson in the past.

“Linden loves the PNC and the PNC loves linden. It is a love affair. I don’t question Linden. Ah learn good!

But let me tell you this, you have stood by us through hard times and we will stand by you. PNC will never let Linden down,” Granger added.

A few years ago, Granger had been booed by his own party supporters in Linden at the time of a rift between top officials at the PNCR’s headquarters and a group in Linden that had included former regional chairmen, Sharma Solomon and Vanessa Kissoon.

In clear reference to the no-confidence motion that was last December passed by the 65-seat National Assembly, after then government parliamentarian Charrandass Persaud had sided with the opposition, the PNCR leader vowed that the coalition would not be dislocated from office.

“They tried to stop us but we will continue our work,” he said, adding that “Charrandass didn’t come from Linden.”

Granger credited his governing six-party coalition with increasing government workers’ salaries and old age pensions as well as clamping down on violent crime, including drugs-related killings.

The President, a retired Brigadier of the Guyana Defence Force who has written extensively on security, said his administration has restored confidence in government and human safety, removing rogue cops and defending Guyana’s territorial integrity.

The President stayed clear of any reference to who would be his prime ministerial running mate, but pointed out that it is the PNCR that would be playing the major role in Guyana’s economic development. “The PNC will provide that leadership to Guyana. We were born to lead. The PNC is the party that will lead. Guyana is the country that we’ll lead and this is the time for our leadership,” he said.

Other achievements, he listed, include periodic local government elections and the establishment of four new towns, economic growth of 4.1 percent last year, GYD$89 billion in new investments that yielded 1,600 jobs, reduction in the value added tax, increased free transportation for school children, GYD$170 billion on education in the last four years including GYD$31 billion last year and GYD$52 billion this year. “We will make sure that the education budget continues to grow. Not a single Guyanese child must be left out of nursery or primary or secondary school,” he said.

Previous: Carl Greenidge renounces British citizenship; ready to be candidate in next elections
Next: Tullow eyes shore base in Guyana, appraisal wells to be drilled next year