The Alliance For Change (AFC) and A Partnership for National Unity (APNU) are locked in tight deliberations over whether their almost five-year old political agreement should be changed to give the President the opportunity to choose his presidential candidate this time around, well-placed sources said.

Officially, representatives of APNU and AFC have refused to comment on the ongoing negotiations that would more than likely have to wrap up very soon now that March 2, 2020 has been set for Guyanese to go to the polls.

“I am bound by the agreement both on the side of the AFC and the APNU that once the talks are ongoing that we’ll be very silent. We will try our best to avoid responding to the press and to giving information one way or the other and when we do give the information, we will do it collectively,” APNU negotiator, Tacuma Ogunseye said.

Asked specifically if there was a sticking point on the method that should be used to pick the Prime Ministerial candidate, Ogunseye responded with “no comment”.

“We made a ruling that we are not going to speak with the press in relation to what is happening with the Cummingsburg Accord…so these questions directed at the Cummingsburg Accord – I know some of the answers to them. I have been briefed but I wouldn’t want to breach the protocol that those two persons (David Patterson of the AFC and Volda Lawrence of the APNU) speak,” he said. 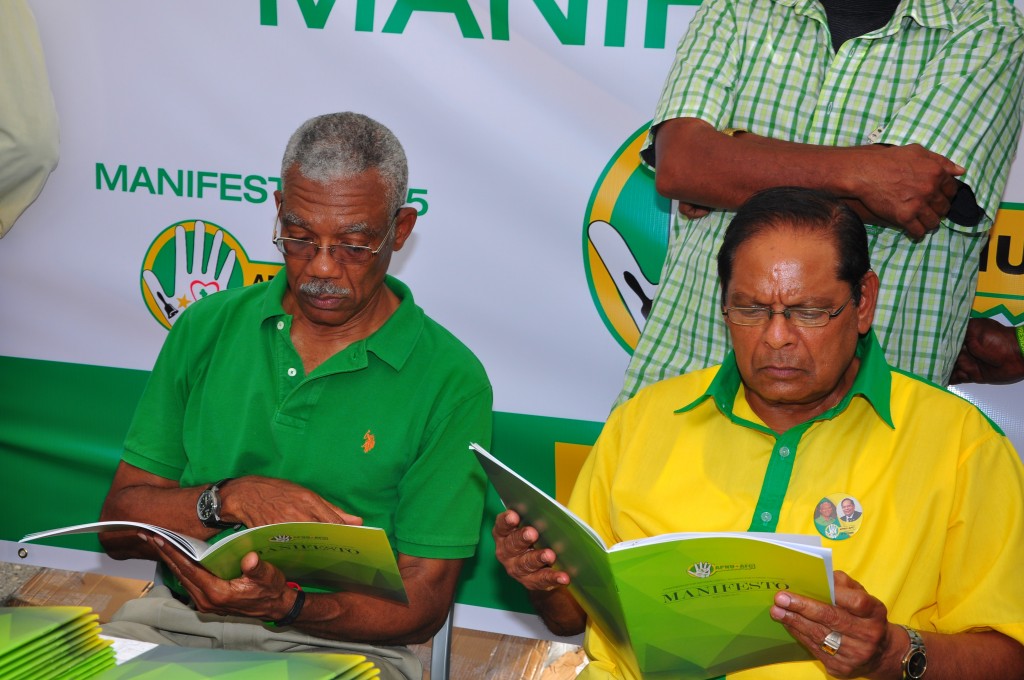 However, insiders say APNU wants the agreement, styled the Cummingsburg Accord, to be amended to allow the President to consult with the AFC on who should be his prime ministerial running mate. However, the AFC side is insisting that the Accord remain intact so that the APNU presidential candidate merely accepts the AFC’s nominee as his running mate. They fear that such an approach will open the door for the President possibly rejecting the AFC nominee.

Among the issues raised in the the closed-door negotiations is that Joseph Harmon has already possibly signaled his People’s National Congress Reform (PNCR) preference for incumbent Prime Minister Moses Nagamootoo to be retained as Granger’s running mate. Harmon’s utterance that Nagamootoo is the “best prime minister” had come several days after the AFC had overwhelmingly picked its leader, Khemraj Ramjattan to be the next Prime Minister.

However, Ramjattan expressed confidence that he would be Granger’s running mate. “My chances are very good. That’s the answer to your question….It is for the people who are negotiating what we are gonna do and I strongly believe that ‘ yes’ it will happen,” he said when asked by Demerara Waves Online News/News-Talk Radio Guyana 103.1 FM.

Insiders reason that the PNCR, which is the largest of the APNU parties, feels far more comfortable with Nagamootoo in contrast to Ramjattan who is regarded as sometimes more brutally frank and decisive.

Sources say APNU was also asking for probably three more parliamentary seats, but in exchange the AFC was likely to ask for more seats in the local government system. The Cummingsburg Accord did not provide for the allocation of seats and portfolios in local government elections.

The Cummingsburg Accord is dubbed the Valentine’s Day agreement because it was signed on February 14, 2015 by the parties which formed the APNU+AFC coalition. The terms of
the coalition are spelled out in the Accord, which outlines the principles and objectives of the coalition, its policy priorities, the role of the president and prime minister in a coalition
government, an agreed allocation of Cabinet seats in the same (60 percent APNU, 40 percent  AFC); and a minimum number of parliamentary seats for the AFC in the next Parliament (12),
among other priorities. The agreement is set to expire in 2020.