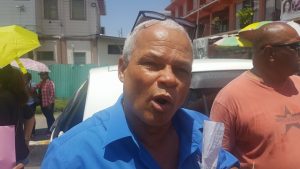 There has been a fallout in the Mass Action People’s Movement (MAPM) after two leading activists, Don Singh and Marcel Gaskin, appeared poised to join the Civic component of the opposition People’s Progressive Party (PPP).

Gaskin told Demerara Waves Online News that it was “regrettable” that he was not contacted for a comment because “up to this point I have not joined the Civic”.

Jonathan Yearwood, who has been a strong advocate in MAPM against parking meters and for constitutional democracy, on Sunday ruled out protesting under the umbrella of that non-governmental organisation. “MAPM will now be accused of being aligned to the PPP and I will not be a part of the PPP nor the APNU/AFC. I have protested under the banner of MAPM as MAPM was deemed to be independent but that is no longer the case.

“By openly joining with either of the PPP or the APNU/AFC, Don Singh and Marcel Gaskin have basically dragged MAPM with them. MAPM has slowly been infiltrated by the PPP to the extent where certain pro-APNU/AFC people were evicted by an administrator of the group, without any consultation. Now that infiltration is almost complete, it’s time for me to maintain my independence against the PPP and the APNU/AFC,” Yearwood told News-Talk Radio Guyana 103.1 FM/Demerara Waves Online News.

Yearwood is himself an executive member of A New and United Guyana (ANUG) political party. 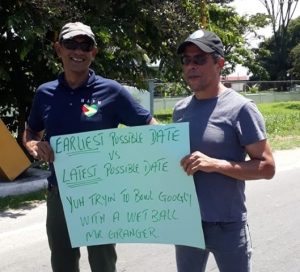 City businessman, Gerry Gouveia told an MAPM Social Media forum that no one should be afraid to be politically aligned. “Regardless of party affiliation or support, in a democracy one is entitled to choose, and to make that choice known publicly without fear of reprisal. At the very least, there is no subterfuge and those that have declared as such cannot be accused of a ‘hidden agenda’. Why should anyone have any rancour for those brave enough to take a position?” said Gouveia who is also Chairman of the Private Sector Commission (PSC).

At times, pro-government actors have stopped perilously short of labelling the PSC an ally of the PPP.

City businesswoman, Alana King, in that Social Media forum, opted out of that forum but not before stating categorically that she respected Singh and Gaskin’s decisions to embrace the PPP through the Civic component. “Don and Marcel…you both have at all times been respectful of others in the group…You have my utmost respect for your choices. I will however take my leave of this group….I wish everyone the best of luck,” she said.

Sources said the PPP plans to next week formally announce that Gaskin and Singh have joined the Civic component, a loosely-knit arm of that political party that dates back to the 1990s under the late President Cheddi Jagan.

Singh last November failed in his bid to win a seat at the 2018 Local Government elections for Constituency 1.

Gaskin has been a plaintiff in several political and anti-parking meter cases in the High Court. A well-known civil engineer, he is also the brother of former Minister of Business Dominic Gaskin.’

In its previous incarnation as Movement Against Parking Meters, MAPM had mobilised hundreds of people once weekly outside City Hall about two years ago and successfully pressured Central Government to virtually scrap the controversial parking meter project.

Several other persons have also dissociated themselves from MAPM, following the publication of the Demerara Waves report earlier Sunday that Singh and Gaskin have gravitated towards competitive politics.