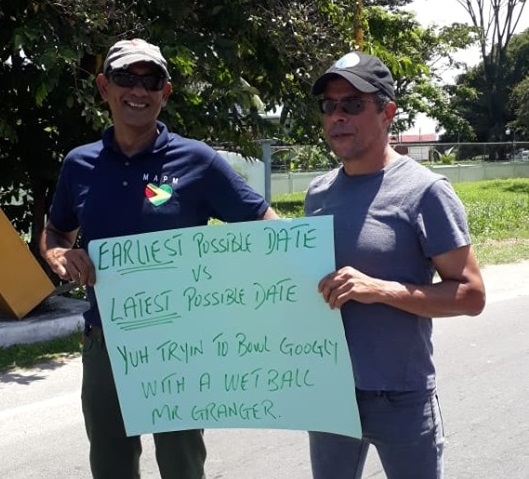 Two leading architects and activists of the Mass Action People’s Movement (MAPM), an organisation that originally opposed the introduction of parking meters in Georgetown, have decided to join the loosely-knit Civic component of the opposition People’s Progressive Party (PPP).

Don Singh confirmed that he and Marcel Gaskin have decided to be part of the Civic group and will push “from inside” to get constitutional reform on issues such as the electoral list system and powers of the executive system.

“You are faced with a decision because doing protests and being a vocal part of civil society and you are not getting anywhere, so the ultimate decision is to try to change it from the inside out, not from the outside in,” Singh told News-Talk Radio 103.1 FM/Demerara Waves Online News.

Singh was a candidate in the 2018 Local Government Elections.

Demerara Waves understands that the PPP intends to formally announce the engagement of Singh and Gaskin on Tuesday. MAPM, formerly known as the Movement Against Parking Meters, had successfully forced the David Granger-led administration to block the Georgetown City administration from introducing a paid metered parking system in the capital, citing a lack of transparency and violation of the city bylaws and procedures.

Gaskin, a well-known civil engineer and brother of former Minister of Business Dominic Gaskin, had also been a party to a number of High Court cases concerning the electoral system, and parking meters. The duo had also been a part of the now seemingly dormant Reform, Inform, Sustain Educate (RISE) since its launch over two years ago.

Back in the 1990s, the once vibrant non-governmental advocate for electoral reform and democracy, Guyana United Action for Reform and Democracy (GUARD), had become comatose after deciding to enter competitive politics.

Samuel Hinds, a former GUARD activist, was then handpicked by Cheddi Jagan, to be his prime ministerial running mate for the 1992 general elections. Henry Jeffrey, who had been the designated point person of the Civic component in 1992, and then President Bharrat Jagdeo had a bitter fall-out that had resulted in Jeffrey resigning from the government.