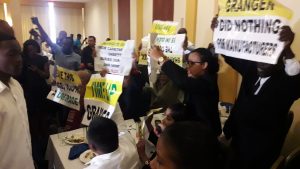 Several People’s Progressive Party (PPP) supporters on Thursday heckled President David Granger and raised placards as he delivered an address on the political situation to a private sector luncheon.

While the protesters, including Juan Edghill, Peter Ramsaroop and Nigel Dharamlall came prepared to protest because they had neatly written placards, the boisterous protest was triggered when Granger remarked that he had moments earlier experienced a bit of “hooliganism”. He was apparently referring to a protest by about 120 PPP supporters outside the Pegasus Hotel.

Edghill, Nandlall and others chanted “illegal government” for a sustained five minutes. The President sought to endure the protest but eventually discontinued his address until the situation was brought under control.

Business executive, Ramesh Dookhoo moments later urged the protesters to respect the event that was organized by the Guyana Manufacturers and Services Association.

As the President remarked, Thursday’s episode was similar to one the opposition PPP lawmakers had staged while he had addressed the Parliament.