28 Guyanese signal interest in returning home from The Bahamas; family of 5 back home: “I know despite wherever we go, Guyana will not refuse its citizens out there,”- teacher 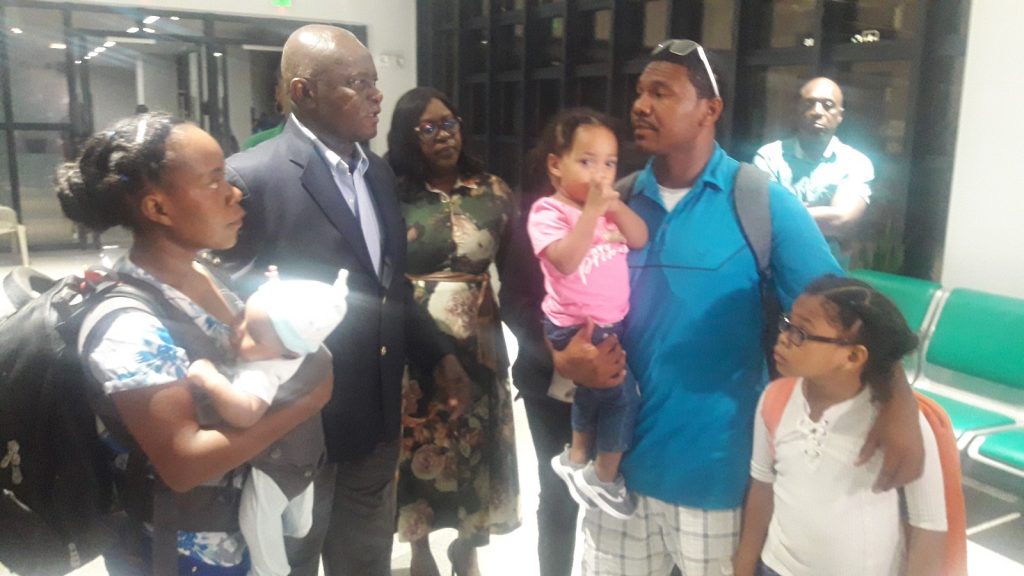 Mr. Orin Grimmond (blue T-shirt), holding his two daughters. At extreme left is his wife and their two-month old son. In the centre are Minister of Citizenship and Immigration, Winston Felix and Minister of Foreign Affairs Karen Cummings.

Even as the government finalises arrangements to facilitate the evacuation 28 other Guyanese from storm-torn Bahamas to their homeland, a man and his family Sunday night were the first State-sponsored returnees.

“We dealt with this first five, this family, and we anticipate there are others…We do not leave Guyanese in distress outside of Guyana,” said Minister of Citizenship and Immigration Winston Felix who journeyed to the airport to welcome back home the family of five.

Teacher, Orin Grimmond expressed delight at being back in Guyana and said he had no intention to return to The Bahamas to work. “To begin with, (this) is my country after all. I know despite wherever we go, Guyana will not refuse its citizens out there,” he told reporters.

“If we return, it’s just to visit, check back families and friends that are there, but to work – it’s really difficult to relive those experiences, to see the houses that were there,” said Grimmond who taught at the Long Bay Adventist School in Marsh Bay, Abaco, part of the island where Hurricane Dorian, a category 5 storm, tore through.

Felix said 28 other Guyanese have signaled their interest in receiving government’s assistance to return to Guyana, but arrangements first have to be finalised. “The issues now, which we have to resolve, concerns logistics and personally, finally deciding that they will come. We have an indication. I think there are twenty-eight persons who we understand would like to return but those arrangements have to be properly organised,” the Minister said

The Grimmonds, who hail from Lethem, Rupununi, were living in The Bahamas for seven years. The head of the family briefly recounted their close shave with death during the passage of Hurricane Dorian over Abaco in the north of The Bahamas.”The experience is horrifying, it’s traumatizing to begin with because, as husband and father, I looked at my family and there was nothing that I could have done to save my family. We were in the ceiling and the water was rising. It was terrifying because there was no way to escape this water,” Grimmond told News-Talk Radio Guyana 103.1 FM/Demerara Waves Online News. He said Abaco was devastated, people died and in some instances parents put their children in trees to save them,” he added.

Guyana’s Honorary Consul in The Bahamas, the Ministry of Foreign Affairs and the Civil Defence Commission are coordinating relief efforts for Guyanese in The Bahamas.