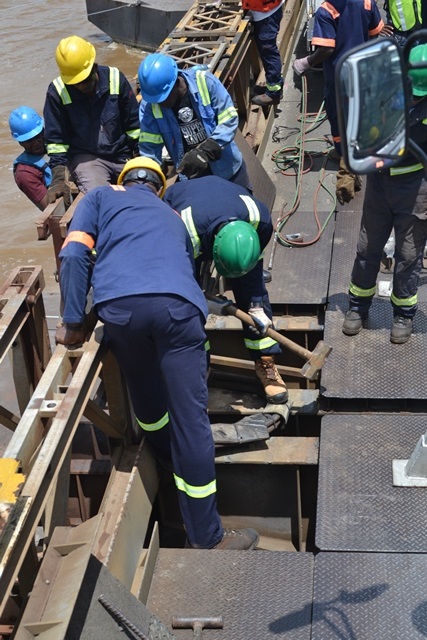 The Demerara Harbour Bridge (DHB) will be reopened to cars, minibuses, motorcycles and small canters from 6 pm Tuesday evening, the Minister of Public Infrastructure said.

While the General Manager of the Bridge Corporation, Rolston Adams declined to state a fixed date when marine retraction will be allowed, he said that retraction would resume once systems are in place to do so.

Commuters have been using the speedboat service at Vreed-en-Hoop to travel to Georgetown.

At the same time, Junior Minister of Public Infrastructure, Jaipaul Sharma said the Maritime Administration Department (MARAD) and the Guyana Police Force were still conducting their investigations. He said the crew of the tug and barge were still detained as part of the probe into the early Monday morning incident that resulted in extensive damage to the east-west corridor of the bridge.

He expected the DHB Corporation to press its case for recovery of the cost of repairs. Sharma said after the full cost of the repairs is tallied, the agents of the vessels would be notified. “The Harbour Bridge will do whatever they have to do,” he said.

The barge and tug slammed into the bridge early Monday morning, dislocating a section of the crossing.

According to the General Manager of the DHB, works are ongoing in three phases. These are being executed by a team of seven engineers with 54 supporting staff along with one diver.

“Between yesterday to today, that number went up to somewhere about 16,” said Adams. This is attributed to the buoys being flooded with water after becoming punctured during the Monday morning accident. The General Manager noted that the damage to these additional buoys was not visible until time had elapsed on Monday.

“At some locations where we thought that the anchorage was okay, it wasn’t… The vessel was able to drag a lot of those anchors and those anchors are 15-tonne anchors.”

As a result, the dragged anchors have caused the buoys to be out of their uniformed position along the bridge.

Nevertheless, the workers have reconnected 14 anchors and nine connecting posts by Tuesday morning with four more to be put in place during the week.