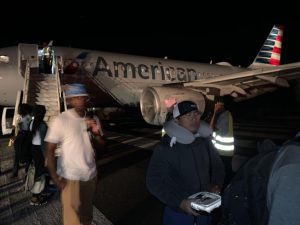 More than 100 American Airlines (AA) passengers bound for the United States (US) were forced to remain in Guyana after raised runway lights slit the plane’s tyres, sources said.

“The aircraft was taxiing out for takeoff. During the turn at the end of the runway the wheels struck the raised lights on the taxi way,” the source told Demerara Waves Online News.

The source calls on the Cheddi Jagan International Airport to level the lights with the tarmac or issue a notice to airmen (NOTAM).

The source said the passengers were transported by bus from the aircraft where the incident occurred to the airport terminal.

They were due to leave Guyana later Wednesday when another AA plane arrives.

This is the second reported major delay of AA passengers leaving Guyana in recent weeks.