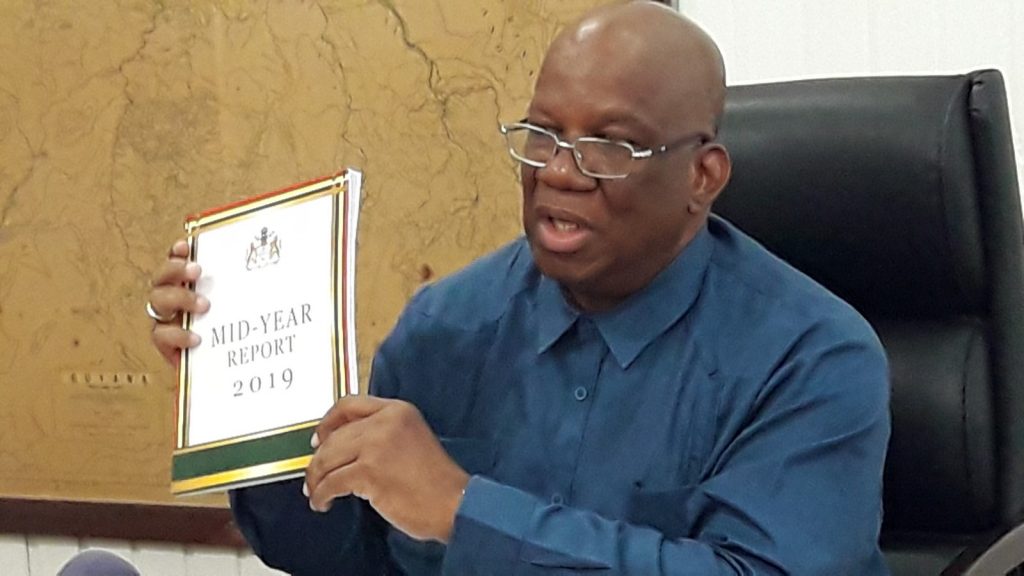 Finance Minister Winston Jordan with a copy of the 2019 mid-year report.

Speaking at the presentation of the 2019 mid-year report, he said this year’s growth rate has been revised again. Originally, the projection was 4.6 percent but that was adjusted downward to 4.4 percent at the time of an International Monetary Fund (IMF) evaluation.

On Wednesday, he said based on the half-year performance of 4 percent compared to the same period last year, this year’s overall growth rate is now expected to be 4.5 percent.

The Finance Minister, however, cautioned that this year’s overall projection could be hampered by poor weather and the political climate dating back to last December when the no-confidence motion was passed by the National Assembly. “Political uncertainty can have an impact in growth,” he said. Barring any disruptions in sugar and rice production, he said political action was unlikely to take a major toll on growth.

He noted that the unfavourable weather could adversely impact on agriculture and mining.

“The picture is there. It needs no further analysis,” the Finance Minister said.

Jordan said the economic growth of 4 percent during the first half of this year was largely due to “notable expansions” in key sectors such as rice, forestry, gold, manufacturing, construction, wholesale and retail trade and financial and insurance activities.

“Investments by both businesses and households continue to trend upward, evidenced by a 5.7 percent increase in private sector credit. That was driven by significant increases in real estate mortgages as well as loans to business enterprises and individuals,” the 2019 mid-year report states.