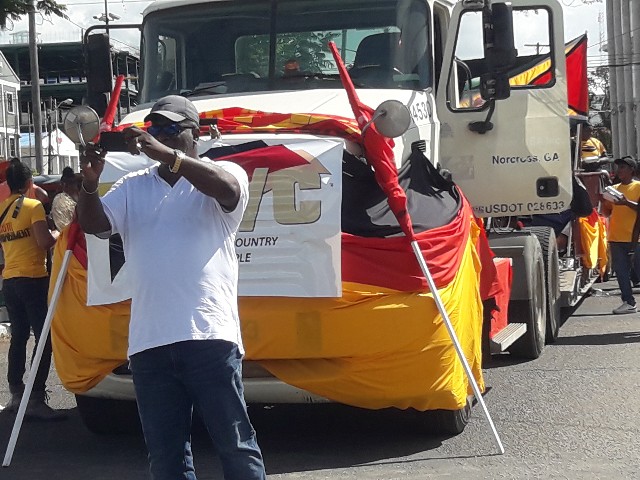 Former Chief-of-Staff of the Guyana Defence Force (GDF) Retired Brigadier Mark Phillips has labelled the just started house-to-house registration as unconstitutional, a position that has run him into a barrage of criticism.

“To conduct House to House Registration is a violation of our Constitution, and is contrary to the CCJ ruling and its Consequential Order. # RESPECT THE RULE OF LAW & PROTECT OUR DEMOCRACY,” he said Saturday on Facebook, the same day the Guyana Elections Commission began the controversial process. 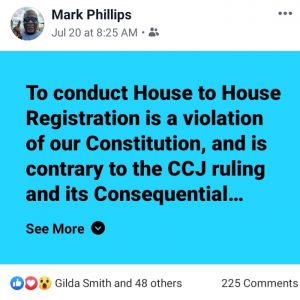 Phillips, who has been touted in some quarters as the opposition People’s Progressive Party’s Prime Ministerial candidate, has been attending PPP activities in recent months. He has previously side-stepped questions about the likelihood of his candidacy.

His call for respect for the constitution has seen him coming under intense criticism in the more than 200 comments under his Facebook post. “Mark Phillips, this is a most ignorant and unfortunate statement. It encapsulates your abject lack of knowledge and intellectual heft and portrays you in the category of a house slave, Trump republican – shallow and foolish, and regurgitating PPP koolaid without verifying its truthfulness. Since when registering to vote, as mandated by the constitution, is a violation of the constitution?

It is frightening that someone of the calibre of the person making this asinine statement was the head of our military, and worse, aspires to be Prime Minister of our country. In fact I now see why the PPP might want to make you their Prime ministerial candidate. Your gullibility,
intellectual laziness and house slave inclinations rise to the level of another buffoon – the infamous Sam Hinds. I suggest you actually read the constitution and the consequential order of the CCJ before you attempt to quote therefrom. It will save some embarrassment,” Rickford Burke. 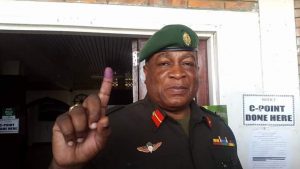 Retired Brigadier Mark Phillips showing off his indelible ink-stained index finger as evidence that he had voted in Local Government Elections 2016.

However, Raoul Denny cautioned commentators like Burke against being too emotional: “I, we, may not always agree with what Mark says, however we are yet to see a discourse that is less emotional, more fact base without the usual insults, name calling and condescend. Mark is a citizen of Guyana who served with distinction. He has his own opinion, and he is free to choose his own political party when he is ready. Remember there are technocrat positions on each party’s slate, there are also varying factions withing the same political movement whether it’s the coalition or it’s the PNC(R) or the PPP(C). Sometimes political naivety can make many of us believe we can change or offer directions to these political monsters from within, but when we get in reality quickly steps in. At this rate of thought, I would bet that had Mark been self employed there would have been a mass movement to boycott and close his business,” Denny said.

The People’s National Congress Reform (PNCR) and the Working People’s Alliance (WPA) have come out in strong support of house-to-house registration within 90 days before the next General elections.

The WPA said the registration process would allow for elections to be held within the shortest possible time with a clean voters’ list—the two opposing demands by the governing coalition and the People’s Progressive Party. The WPA party urged government and Opposition to agree to extend the life of the National Assembly. “In other words, the GECOM timeline offers the two political principals an opportunity to come to a consensus on elections before the end of this year. This is a win-win outcome for all sides. WPA now urges the PPP and the president to agree on a timeline for elections and to convene parliament to extend the life of the government in keeping with that agreed timeline,” the WPA said.

“The People’s National Congress Reform (PNCR) welcomes the Guyana Elections Commission’s (GECOM’s) independent decision to commence house-to-house registration, starting tomorrow, Saturday 20th July 2019. This decision is completely consistent with both the Constitution and the CCJ’s ruling that we need to hold fair and credible elections in the shortest possible time,” the PNCR said in a statement.

The business community, including the American Chamber of Commerce-Guyana (AMCHAM), an organisation of United States-headquartered businesses operating here, is the latest private sector body to have called for “strict adherence to the Caribbean Court of Justice (CCJ) ruling on July 12. In maintaining Guyana’s democratic status, AMCHAM urged all political actors to comply with the CCJ ruling in an effort to bring an early resolution to the consequential orders in keeping with the Constitution of Guyana.

“The Chamber anticipates that this process will be expeditious and mirrors democratic customs as was explicitly clear in the ruling of the court as mandated by the relevant provisions of Guyana’s Constitution, which in effect ensures the maintenance of the rule of law which is critical for continued investor confidence in Guyana.

AMCHAM says it notes the obligations of the President of Guyana, the Leader of the Opposition and the Guyana Elections Commission to act with integrity and statesmanship in upholding the constitution and rule of law. “It is an opportune time for goodwill to prevail to unite all the people of Guyana towards a sustainable and economically prosperous Guyana,” the chamber said.

Meanwhile, the umbrella Private Sector Commission (PSC) on Sunday wrote Chief Elections Officer Keith Lowenfield telling him that the conduct of house-to-house registration was illegal and should be stopped.

Opposition Leader Bharrat Jagdeo and President David Granger are at odds over their interpretation of the CCJ’s decision on the appointment of a Chairman of the Guyana Elections Commission, with the Guyanese leader insisting that he must be allowed to pick nominees for submission to the Opposition Leader who would then include them in the list of six names.

The President is then expected to pick one of those acceptable nominees for the post of GECOM Chairman.

However, Jagdeo has made it clear that he is not constitutionally obligated to include any of the names suggested by Granger. The Opposition Leader has refused to include Attorney-at-Law Kesaundra Alves and Retired Justice Claudette La Bennett.