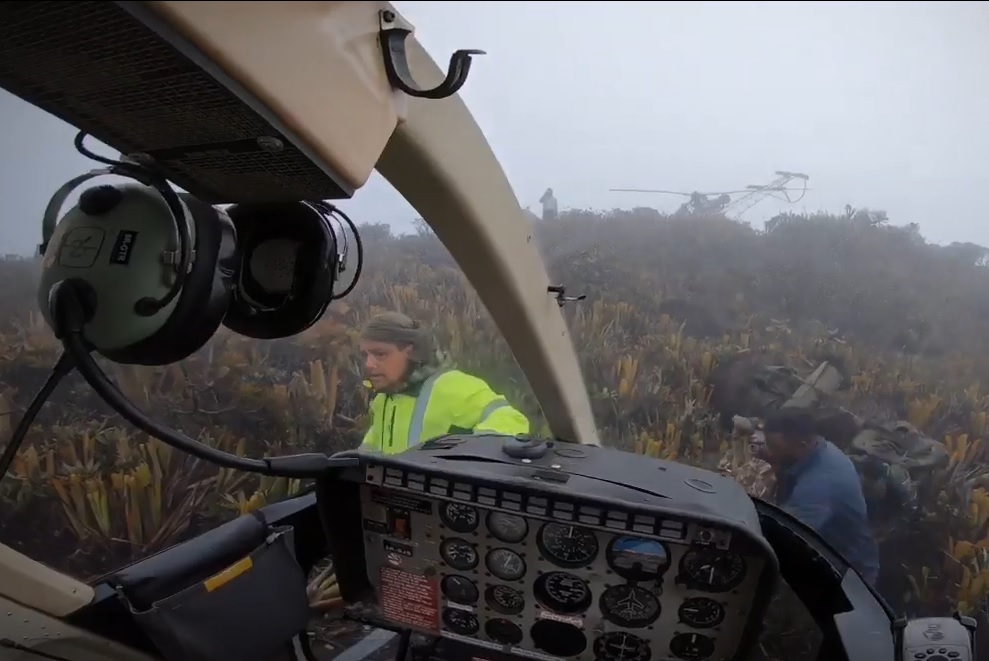 The Venezuelan pilot leaving the scene of the accident involving the Venezuelan-registered helicopter, in the background, that he had been flying. (Screen grab from YouTube Video).

A Venezuelan-registered helicopter, piloted by a former Venezuelan military intelligence officer, made a fiery landing on Mount Ayanganna while on a mission for the Guyana Defence Force (GDF), officials said.

A GDF spokesman confirmed that the incident occurred in late May while the Alouette helicopter, bearing registration markings YV-3214, was taking a plaque and other items to Mount Ayanganna in late May, 2019.

The spokesman said the chopper, which was working for Hopkinson Mining Security Services, was serving the GDF on that mission free of cost.

Director-General of the Guyana Civil Aviation Authority (GCAA), Retired Lt. Col. Egbert Field told Demerara Waves Online News that the aircraft made a precautionary landing on Mount Ayanganna. “We’re going to go deeper into this. As far as we are concerned it was a precautionary landing because of an engine indicator,” he said.

However, other sources disputed that account. Video being circulated also shows that the pilot was still sitting in the cockpit while someone shouted telling him that flames were emanating from the exhaust.

The Venezuelan pilot, known by many as ‘Israel’, was later extracted from the site by an Air Services Limited (ASL) helicopter. He has reportedly told several persons that he is a former Venezuelan military intelligence operative. Field said the pilot was yet to submit a report to the GCAA in accordance with the regulations.

Mount Anyanganna is located in the mineral- and forest-rich Essequibo region which is being claimed by Venezuela in a long-running border controversy. 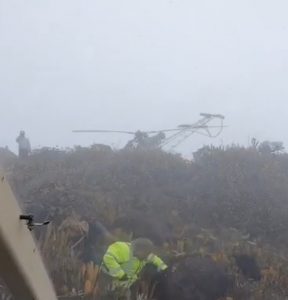 A close-up of the Venezuelan-registered helicopter atop Mount Ayanganna. (Screen grab from YouTube Video).

Until now, no government agency has said the Venezuelan-registered helicopter had encountered difficulties and landed on Mount Ayanganna.

The GDF’s helicopters, sources said, do not have the capacity to fetch very heavy items such as the plaque.

Government last year had indicated that its priority had been the purchase of two Britten-Norman BN-2 Islander and two Short SC-7 Skyvan planes.

The lone Bell 412 helicopter has since been rendered unserviceable and left to further deteriorate at the Timehri-based Army Air Corps’ Air Station London.