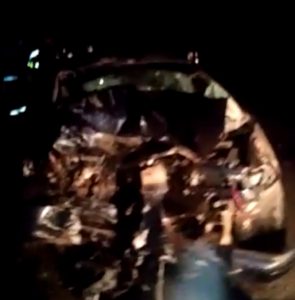 One of the mangled cars that collided at Hill Foot, Soesdyke-Linden Highway.

Firefighters assisted in rescuing the occupants from the mangled vehicles.

“As a result of the collision, the driver of the hire car along with four passengers were injured and the driver of motor car PVV 535 along with the occupant received injuries,” the Guyana Police Force said.

They were all picked up in conscious condition and taken to the Diamond Diagnostic Center where they were seen and examined by a doctor on duty who pronounced Williams dead on arrival.

Randy Stoby and Alliyha Munroe were seen and examined by a doctor on duty and were later referred to the Georgetown Public Hospital where they were admitted.

Stoby suffered a fracture to his lower back, Munroe sustained lung injuries and Stewart’s right hip was fractured.