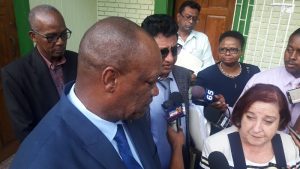 Government and opposition representatives briefing the media shortly after their meeting.

Political negotiators for the government and opposition Thursday evening decided to ask President David Granger and Opposition Leader Bharrat Jagdeo to consider a total of 13 nominees to further shortlist them down to six from which the next Chairman of the Guyana Elections Commission (GECOM) would be picked.

The 13 names include eight that Granger suggested to Jagdeo and five of the 11 that Jagdeo had submitted to the Guyanese leader.

“At the end of it we agreed that at this stage, the plenipotentiaries – that is to say the representatives of the President and the Leader of the Opposition – have gotten to a point where they believe that our two principals should meet,” Director-General of the Minister of State, Joseph Harmon told reporters.

Gail Teixeira, who led the opposition People’s Progressive Party’s (PPP) delegation, indicated that the Opposition Leader did not need to consider the names that the President proposed “which we assume are not unacceptable to him”. The PPP’s account varied slightly from government’s with Teixeira saying that the talks were aborted because they were now log-jammed. “We felt at this stage it was not possible to go further in the discussions at this level and, therefore, it would be most appropriate that we hand over to the Leader of the Opposition and the President.”

The apparent stalemate came less than one day before the Caribbean Court of Justice (CCJ) was due to issue its consequential orders having already ruled that the no-confidence motion was validly passed last December by 33 to 32 votes in the National Assembly.

Teixeira explained that there was no clear indication of whether the five shortlisted names would be acceptable to the President and so “it would be wise” for Granger and Jagdeo to meet.

But Harmon disputed Teixeira’s account, saying that one more person was Thursday shortlisted.

Previous: PPP asks CCJ to order swift appointment of GECOM Chair, general elections on Sept 18 with same voters list
Next: OPINION: Prisoner’s Dilemma and a call to extend and reform