Opposition Leader, Bharrat Jagdeo, through his lawyers, have asked the Caribbean Court of Justice (CCJ) to order that President David Granger name September 18 as election day, and his party wants the regional court to order that a Chairman of the Guyana Elections Commission (GECOM) be appointed in three days.

“In order to facilitate such an election, the President shall by proclamation, appoint a date for the holding of the said election no later than the 18th September, 2019,” his lawyers including Trinidad and Tobago Senior Counsel Douglas Mendes and former Guyana Attorney General Anil Nandlall stated.

As regards the coalition’s demand for house-to-house registration, the lawyers want the CCJ to order that the election be held using the 31st October, 2018 list in order to approximate as far as possible what the constitution envisaged what ought to have happened.”

His legal team proposes that the regional court orders that cabinet including the President must resign, the government shall remain in office and shall hold an election for members of the National Assembly within three months of 18th June, 2019.

That’s the date on which the CCJ validated the Jagdeo-sponsored December 21, 2018 no-confidence motion, saying it was validly passed by 33 to 32 parliamentarians. The lawyers said that since the three months within which general elections should have been held after the motion was passed expired on March 21, they now want the Trinidad-headquartered appeal court to set a new election date within which the three months since the no-confidence motion was validated.

“Since that date has already passed, the only order which would comply with the spirit and and intent of Article 106(7) is an order requiring an election to be held within a reasonable time, but certainly not later than three months from the date on which this court reversed the decision of the Court of Appeal and held the vote of no-confidence to be valid, that is to say three months from 18th June, 2019,” the lawyers state. 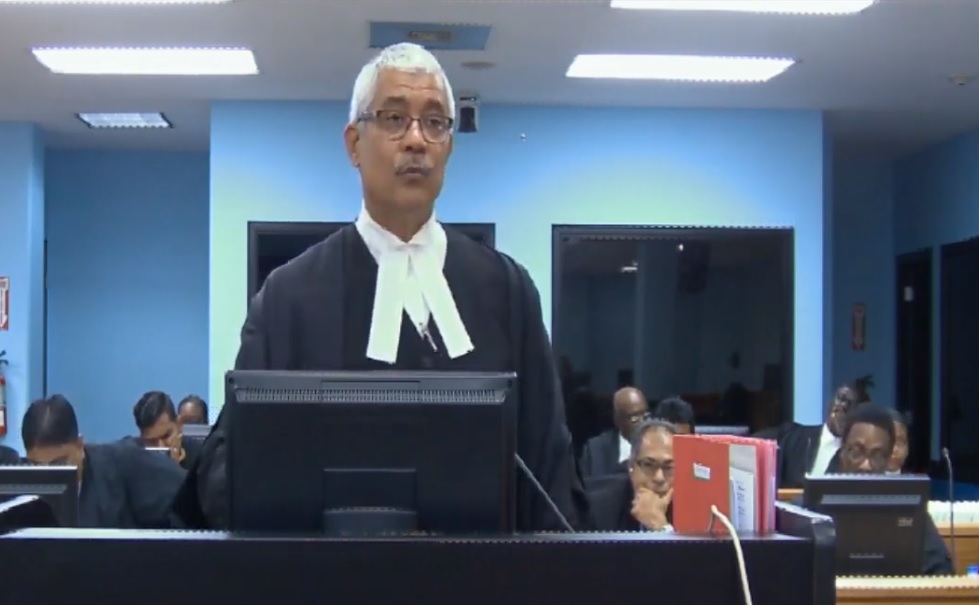 Related, the Executive Secretary of the opposition People’s Progressive Party (PPP) Zulfikar Mustapha, through his lawyers, are asking the CCJ to hasten the appointment of the GECOM Chairman. “The President shall appoint a Chairman from the list so provided within three days of the provision of any such list,” the lawyers state in their proposed consequential order. If the court counts three days from their issuance of the orders on Friday and Mustapha gets his way, then the new Chairman will be appointed by next week Monday.

Jagdeo and Mustapha’s lawyers, who also include Devesh Maharaj, C V Satram and Kandace Bharath, told the CCJ that they have no faith in Attorney General Basil Williams’ assurance that a GECOM Chairman needs to be appointment swiftly. “We understand from the Attorney General’s oral submission at the hearing on 24th June, 2019 that he accepts that a consequential order requiring expedition in the appointment of a Chairman is appropriate but he opposes any fixed timelines.

Respectfully, given the great efforts being made by the Attorney General to push the election date as far back as possible , the opposition has no basis to be confident that the Attorney General will not use a vague requirement of ‘expedition’ to draw out the process of appointment and frustrate the elections. It is therefore respectfully submitted that timelines for the conclusion of the process ought to be engrafted in constitutional orders,” the lawyers told the Court.

Against the backdrop of the governing coalition’s repeated insistence that house-to-house registration must be first held to generate a fresh voters’ list in order to ensure “credible elections”, Jagdeo told the court that such registration has not started and that a list would not be ready until December 25, 2019. For the Opposition Leader, that would delay the elections and amount to a “cynical and indeed transparent attempt to subvert the constitution” and render the no-confidence motion useless. “The no-confidence motion aim was to cut short the government’s term of office by one year, but if elections are held at a point in time that would render the vote of no-confidence entirely ineffective and otiose,” Jagdeo said through his lawyers.

The postponing of an election, the legal team stated, would violate the constitution as it relates to the passage of a no-confidence motion and moreover an election could be postponed by the elections commission only as a result of danger or serious hardship only after a date is fixed in accordance with the constitution.

If the elections had been held by March 21, Jagdeo said it would have been with the same voters’ list. “In the premises, it is respectfully submitted that in order so far as possible to ensure compliance with the constitutional mandate to hold an election no later than 21st March, 2019, the election which must now be held, ought to be ordered to be held on the basis of the official list of electors in existence on 21st March, 2019. That way, any argument concerning what list is now to be used is avoided,” he said. He further contends that in any event there is nothing in any law which requires the postponement of any election date fixed in accordance with the Constitution, to permit the Commission to carry out house-to-house registration, as the Attorney General and the Commission appear to contend.

The Opposition Leader’s lawyers further state that since 2008, the official list of electors has been revised by the usual process of claims and objections in accordance with the National Registration Act. Lists prepared on this basis were used in the general elections in 2011 and 2015 and the local government elections in 2016 and 2018. “The threat to start house to house registration in July 2019 is in a sense an aberration and gives rise to the suspicion that it is being used as a pretext to persuade this Honourable Court to delay the elections for as long as possible,” he said.