Reproduced from the Star 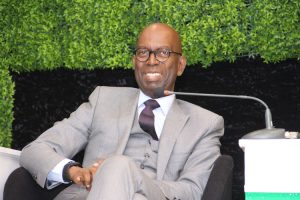 Born in 1958, Bob Collymore was a Guyanese-born British businessman and the immediate past Chief Executive Officer for telecom giant, Safaricom.

Collymore started schooling in Guyana while still living with his grandmother until age 16 when he moved to the UK to join his mother in 1974.

He attended Selhurst High School for Boys in London where he completed his formal education.

In various interviews, Collymore had revealed that he started earning money at the age of 12 while living with his grandmother in Guyana.

He would make art pieces from plastic moulds and also little brooches from coconut shells which he would sell.

In 2006, he became the governance director for Africa at Vodafone and subsidiary Safaricom before assuming the CEO Position in 2010 in Kenya.

Collymore married his second wife, Wambui Kamiru, on April 2, 2016, in an invite-only wedding at an upmarket residence in Kitisuru, Nairobi.

Collymore bagged several awards during his time with Safaricom most recently the CEO of the Year award conferred by Africa Investor.

He has held the position of CEO of Safaricom Limited since November 1, 2010.

Previously he has worked in the UK, Japan, and South Africa in a number of senior executive roles in Marketing, Purchasing, Retail, Governance and Corporate Affairs.

He has more than 30 years of commercial experience working in senior executive roles in the telecommunications sector.

Collymore also served on the Board of Acumen, the United Nations Global Compact Board and is a member of the B TEAM, a not-for-profit initiative formed by a global group of business leaders to catalyse a better way of doing business, for the wellbeing of people and the planet.

He also served on the Vision 2030 Delivery Board, was a Founder Trustee in the National Road Safety Trust and Chairman of the TEAMS Board.

He has recently served on a UN Commission on Life Saving Commodities for Women and Children.

In 2012, he was conferred the state honour of Moran of the Order of the Burning Spear by retired President Mwai Kibaki.

Collymore was diagnosed with Myeloid Leukemia and in 2017 he had to travel to the United Kingdom for treatment until July of 2018.

He worked in various positions in the tech industry in the United Kingdom, most notably, Cell Net, Dixons retail and Vodafone and at one time moved to Japan for the integration of J-phone into the Vodaphone group.

Collymore leaves behind his wife and four children.

It was his love for art and music that led him to meet his wife Wambui Kamiru who was an artist at Kuona Trust.