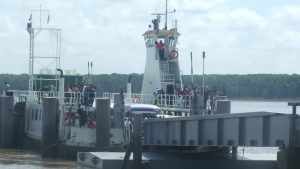 Guyana on Wednesday ruled out funding the replacement of the ailing MV Canawaima ferry, saying the jointly-owned company with Suriname must use the money to repair the 20-year-old vessel.

“There is no onus on Guyana to fund the replacement of the service either temporarily or permanently.

The joint company has to ensure that the monies collected by or on behalf of the business are properly directed to defraying the expenses incurred,” the Foreign Ministry said in a statement.

Guyana indicated that the Surinamese partners in the jointly-owned Canawaima Management Company have violated the agreement for upkeeping the ferry.

“This has not occurred. In a bid to reduce the hardships to passengers and businesses using the service and in order to give the neighbouring state time to meet its obligations, the Government of Guyana has been funding most, if not all of the maintenance works on the ferry over the years,” the Foreign Ministry added.

The ferry vessel’s operations have been suspended to allow the joint company to effect repairs and servicing by the Canawaima Management Company which is responsible for the service.

The Foreign Ministry stopped short of blaming the company for failing to repair the vessel promptly after it sustained damage to one engine in September 2017.

Guyana suggests that the company appear to be short on cash, causing authorities to arrange for a tug to pull the MV Canawaima to ply the Moleson Creek- South Drain route across the Corentyne River.

The Foreign Ministry notes that the ferry service between Guyana and Suriname was officially launched on November 6, 1998.

The ministry says the Guyana/Suriname Cooperation Council at its meeting in 2018 underscored the importance of the Canawaima Ferry Service to bilateral trade and cross border tourism between Guyana and Suriname and agreed that the efficient and optimal operation of the service was to the benefit of both countries.

Guyana’s President David Granger over a year ago raised the matter during his last meeting with his Surinamese counterpart, Dési Bouterse. At that time, President Bouterse undertook to look into the matter.

Guyana says it will request an early meeting of the relevant mechanism in order that the issues affecting the operation of the ferry can be fully ventilated and resolved to the full satisfaction of the parties. “It is hoped that the fact that the service has been of mutual benefit to both countries will inform the treatment of the matter,” the Foreign Ministry added.