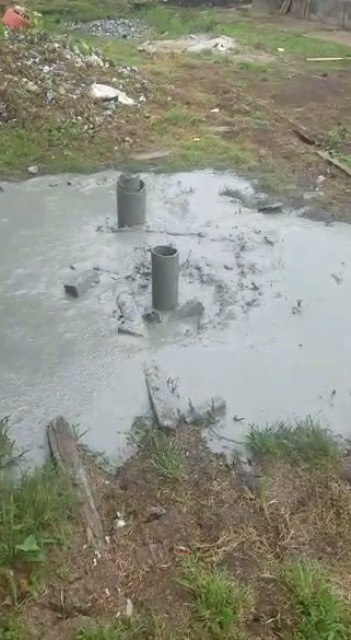 The source of the natural gas eruption at Kumaka in Region One. (CDC picture)

Natural gas was Tuesday continuing to spew in northwestern Guyana from what was expected to be a potable water well being drilled by a Brazilian company for a private businessman, official said.

Region 1 (Barima-Waini) Chairman, Brentnol Archer told Demerara Waves Online News that as far as his regional council was aware, no information or request was submitted. “Our concern at the RDC is if the businessperson would have had the necessary permit provided in order to have that drilling done and so that is what we are trying to ascertain today,” he said.

He was also unsure whether permission was sought from the Hydro-meteorological Department of the Ministry of Agriculture for the drilling of the water well at Kumaka. Clearance for such a drilling programme is also required from the Environmental Protection Agency (EPA), Guyana Water Inc. and the Guyana Geology and Mines Commission, he said.

The Civil Defence Commission’s (CDC) Senior Response Officer, Salim October was quoted by government’s Department of Public Information (DPI) as saying that the eruption was as a result of a Brazilian company drilling a water well at the location. CDC Director-General, Lt. Col. Kester Craig said the situation was being monitored by the National Emergency Monitoring System (NEMS).

“Several agencies which include the Guyana Water Inc (GWI), Environmental Protection Agency and the Hydromet Department have been contacted to conduct an assessment,” Craig said in Facebook post.

He noted that the EPA is liaising closely with the Regional Environmental Officer as an assessment of the situation is being conducted.

Region 1 Chairman Archer said there were no reports of injuries, but a nearby building was muddied by the material.

More than one year ago, a similar situation occurred at Diamond, East Bank Demerara after a man had drilled a water well without permission. Several nearby houses were damaged. The owner of at least one of the properties has sued the man who had been drilling in a backyard for water when he encountered violent natural gas emissions that had lasted several weeks.

The Guyana Geology and Mines Commission had assisted in capping that well.