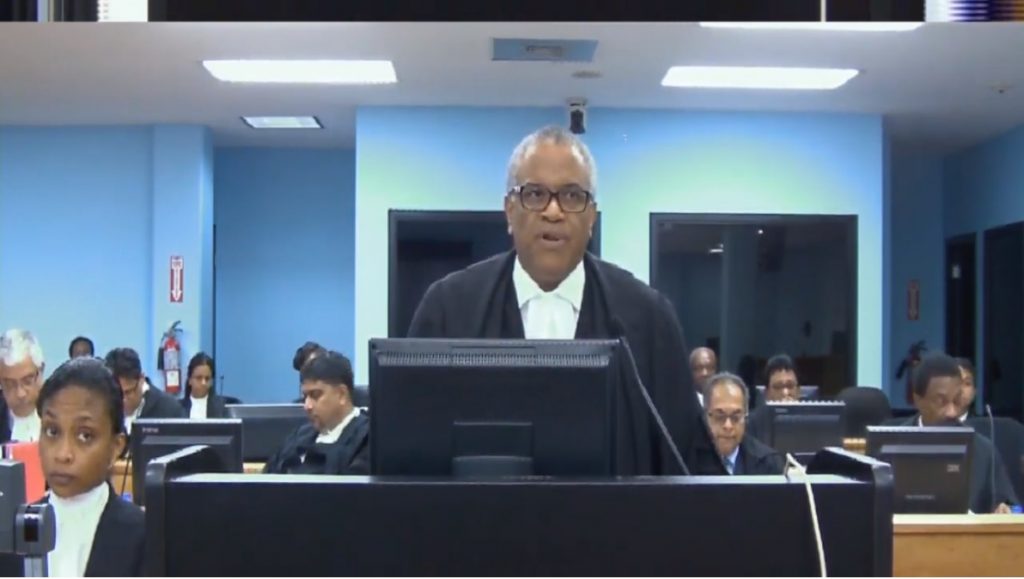 Former Belize Attorney General, Eamon Courtenay on Thursday urged the Caribbean Court of Justice (CCJ) to find that then government parliamentarian, Charrandass Persaud’s vote for the no-confidence motion was invalid because Guyana’s constitution prohibits parliamentarians from being disloyal to the party list of candidates.

Courtenay, who teamed up with Guyana’s Attorney General Basil Williams in their efforts to convince the regional court that the no-confidence motion was invalid, argued that Guyana has a  “very strong anti-defection provision”.

Unlike the constituency system in other Caribbean countries, Courtenay said the anti-defection system was further deepened in 2007 by a constitutional amendment that prohibits crossing of the floor. He added that the anti-defection provision basically tells the Parliamentarians to “remember how you got here”.

Courtenay said tabling of a no-confidence motion was possible only if there is a coalition government and one of the political parties was dissatisfied with broken promises. “Nobody is going to cross the floor. Everybody is going to vote by their list but what is going to happen is that that motion is going to succeed because of the difference in the two parties… but the government cannot remain in power if it does not have the confidence and the loyalty of its partner,” he said.

In response to Justice Winston Anderson’s question on what would be the situation if there is no coalition, the lawyer for the Guyana government said then Article “106 kicks in, you would be recalled.” “Why would you sit there as the Prime Minister or the President and allow that to take place?”

The Belize Senior Counsel further argued that the number of seats in the National Assembly is certain through the number of votes that parties have secured at a general election.

Courtenay stressed that if a parliamentarian no longer supports the list of candidates from which he was drawn, he needs to declare such intent to the House Speaker because the system is structured for MPs to support the policies and measures that have been taken to parliament after internal debates at Cabinet.

On that point, CCJ President Justice Adrian Saunders queries the value of MPs voting in the House and if that merely reduced the proceedings to a charade. Courtenay disagreed, saying that after the debate in caucus and at Cabinet, they then go to the backbenchers to secure their support in the House.

Justice Jacob Wit then asked, “is Parliament then a rubber stamp?”

After Courtenay reiterated that parliamentarians are obliged to vote with their parties’ list of candidates if not their vote would not count, Justice Wit questioned, “what is left of the separation of powers because this ties parliament completely to the executive”.

Justice Saunders described the former Belize Attorney General’s arguments as a “very far reaching submission that involves members of the National Assembly and their freedom of conscience to which they have under the constitution”.

If parliamentarians do not declare their disloyalty to the list, Courtenay also contended that if they vote against a motion or a bill it would fail, they would be recalled and the same motion would be re-tabled and passed.

In dealing with former MP Persaud’s eligibility to have been a candidate or a parliamentarian, Courtenay asked the CCJ to find that he was never elected and that his candidacy was void from the beginning because he, more so as an Attorney-at-law was conscious that he was a dual citizen but took an oath that was contrary.

“Mr. Persaud, in violation of the constitution, in our respectful submission, he never had the title and it is on our submission that he was, in the language of the cases, a usurper,” he said.

Justice Saunder’s position led the court to enquire what would be the implications if Persaud was never validly elected to which Courtenay responded that the court would have to issue temporary orders out of necessity to save approved budgets, tax measures after which Parliament would have to legitimise what has been temporarily made legal.

The Attorney-at-law said the provisions for an elections petition do not apply in this instance, Instead, he told the Court that Vacancy Petition should be invoked.

Persaud in December last voted for the opposition-sponsored no-confidence motion. The CCJ will Friday continue to hear oral arguments before determining whether the motion was validly passed.