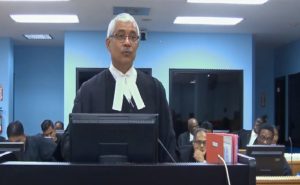 Opposition Leader Bharrat Jagdeo, through his lawyer, on Thursday asked the Caribbean Court of Justice (CCJ) to issue an order to hold general elections in the shortest possible time if the regional law lords find that the no-confidence motion was validly passed.

Senior Counsel, Douglas Mendes asked the court to be “stingy” with the time within which general elections ought to be held because the three-month period after the passage of the no-confidence motion was passed on December 21, 2018.

“The court should be stingy about the further time that should be given to as best as possible comply with the constitutional mandate,” Mendes said.

Emphasising that the constitution is clear that elections must be held, the lawyer said any time to be granted must be kept to be the barest minimum. “We can’t turn the clock back but in determining what orders to make, we have to bear in mind that we are on borrowed time and so any further time that my learned friend wishes to borrow will have to be kept to the absolute minimum,” he said. Mendes said the voters’ list was used at last November’s local government elections and it should be updated to avoid any unreasonable delay.

The Guyana Elections Commission (GECOM) Chairman, James Patterson, with the coalition government-backed three commissioners, has informed President David Granger that house-to-house registration would be conducted in time for general elections to be held by November, 2019 for which GYD$3.5 billion in supplementary funds would be needed.

Attorney-at-law Sanjeev Datadin, representing then government parliamentarian, Charrandass Persaud who had voted for the opposition-sponsored no-confidence motion, told the court that elections could be held within 60 days.

He also suggested that the National Registration Act provides a “relatively simple solution” through which GECOM could set a cut-off date for eligibility persons.

Asked by CCJ President Justice Adrian Saunders whether GECOM needed any other authority other than itself, Datadin said “no, your Honour”. The lawyer said options include the President issuing a proclamation to dissolve Parliament instead of GECOM informing the President when it would be ready to conduct regional and general elections, an extension of the life of the voters’ list that expired on April 30 and a claims and objections period.

Justice Winston Anderson questioned if the elections could be called within three months if there are pending court cases to which Datadin responded that “unless there is an order to stop you from proceeding, then you should proceed.”

Anderson added that the President, Opposition Leader and the Court must obey the constitution, and if the motion was validly passed, elections ought to have been held within three months. Anderson appeared concerned that Guyana’s court did not hear the cases challenging the no-confidence motion in a timely manner that would have allowed the Guyana Constitution to be followed. “I would have thought that the State’s judicial resources ought to have been deployed in such a way that a decision is taken on this matter so that if it goes in one way, the constitution can be upheld. I’m clearly astonished that we are here,” Justice Anderson added.

The Guyana Court of Appeal in March 22 struck down a Guyana High Court decision, saying that the motion had required an absolute majority of 34 instead of 33 votes. However, Mendes on Thursday told the CCJ that Guyana’s constitution does not state simple or absolute majority.’

Datadin added that whether the constitution provided for a simple or absolute majority, “is in large part irrelevant because all of the members of the House voted so what was required was a majority of the House to carry the vote.” He questioned where the additional seat of the House would come from or if one would be taken away from the opposition.

Mendes further contended that then government parliamentarian, Charrandass Persaud’s vote was valid because he had been still a member of the National Assembly and that he had not been required to declare that he had been no longer supporting the list of candidates. The well-respected Trinidad and Tobago lawyer further argued that a parliamentarian could lose confidence in the government because of the way it was managing the country instead of the list or the party.

If Persaud had declared that he had been no longer supporting the list of candidates, according to Mendes, he would have been recalled and would not have been present to vote for the motion. “It’s an anti-crossing the floor mechanism” “It seeks to prevent crossing of the floor so what would happen is if you can abide the government or the opposition, as the case may be, you cease to be a member and then the government or the opposition has the opportunity to replace you on the list because there are provisions for that,” he said.

Senior Counsel Mendes also said Persaud’s membership of the House was valid because no one challenged him within the 28-day stipulated time-frame after an elections through a petition.

On whether Persaud himself had known or remembered that he ought not to have been a candidate, Mendes sought to convince the court that the former Alliance For Change member might have forgotten.

Further, Mendes said if the CCJ finds that Persaud was never a member of the House then the regional court would have to deal with the validity of acts that he had engaged in as a parliamentarian and that the government never had a majority.

Deputy Chief Immigration Officer, Ewart Wray has tendered evidence showing that Persaud has been travelling on a Canadian passport since 1998, but Mendes said the cross-appellants would have to show that his client was acting in bad faith and the court would have to find whether he had remembered swearing allegiance to the Queen of England, Canada’s Head of State, 17 years or earlier.

“It is not implausible that when he says here that I am qualified that that is in fact what he thought,” added Mendes.